Will a Loss in This Year’s NBA Finals Loss Hurt LeBron’s Legacy? 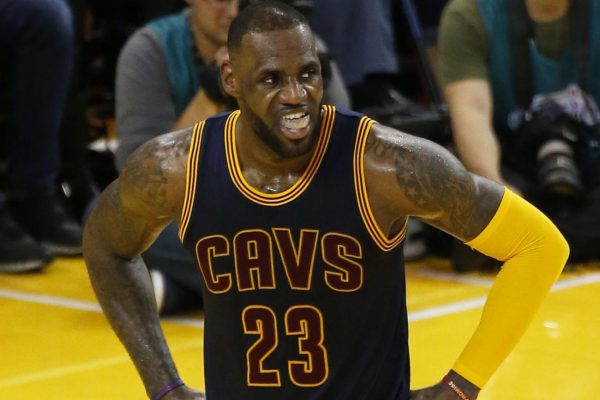 The Cleveland Cavaliers are currently down to 1-3 to the Golden State Warriors in the NBA Finals and Cavs superstar LeBron James is in danger of falling to 2-5 (two wins, five losses) in the finals.

The 6’8″ forward has been the face of the NBA for much of the decade and has dominated teams over the span. His six straight finals appearances is just one example of that consistent dominance. But of the seven finals James has been in, losses vs. the San Antonio Spurs in 2007, Dallas Mavericks in 2011, San Antonio Spurs in 2014, and Warriors in 2015 have blemished the King’s reign in the NBA.

Last year, the four-time MVP had the pass that fellow stars Kyrie Irving and Kevin Love were injured. This year, James’ team is completely healthy and Irving and Love have played almost the entire postseason, yet the Cavs got pummeled in Games 1 and 2 to the Warriors and face a gaping 1-3 hole as their season will end with just one more loss.

The disastrous start to the finals has sparked questions and concerns about James’ leadership and legacy. What the Cavs were able to accomplish by defeating the rest of the East is looking worthless now and James’ destruction of weak competition along the way is beginning to make the six consecutive finals appearances seem less outstanding.

If the losing continues, the question comes up: Will a loss in this year’s finals hurt LeBron James‘ legacy?

It may largely be depended on what people think but the overwhelming answer will be yes. Although the 73-9 Warriors are in contention to be “the best team ever” and have been fantastic all season long, they have been shown to be beatable. Kevin Durant, Russell Westbrook and the Oklahoma City Thunder opened up a 3-1 lead on the Warriors and took them to the brink of elimination.

The Thunder may not have won but they did expose the Dubs and prove they’re not as perfect as people think. James, by himself, put up a fight against this same Warriors team without the services of Irving and Love. Despite the Warriors improving vastly, the Cavs and their Big 3 should have the right motivation — after getting beat last season and seeing OKC nearly win last round — to defeat this illustrious Warriors squad.

Even the Cavs have displayed that they have what it takes to handle the Warriors this finals. James put up 32 points, 11 rebounds, six assists and two blocked shots on 14-of-26 shooting to lead the Cavs to a 120-90 demolition of the Warriors in Game 3.

The enormous performance definitely showed that James and company are capable of beating the defending champs. The two-time champion portrayed he was capable of taking down the invincible Warriors in that Game 3 blowout and it should have resonated with the rest of his team.

Now, with their season in the balance due to the Warriors’ resilience in Game 4 all the praise turns away from James and no excuses will be allowed. Hate and disrespect will shower the 12-time All-Star if he walks away from the finals as a loser for a third straight year. Whether it’s fair or unfair, James will have to live with the result as a 2-5 finals record may get engraved in his legacy.