Don't Miss
Home / Videos / Video: LeBron Explains Why He Hasn’t Felt the Need to Take Over a Game

Video: LeBron Explains Why He Hasn’t Felt the Need to Take Over a Game 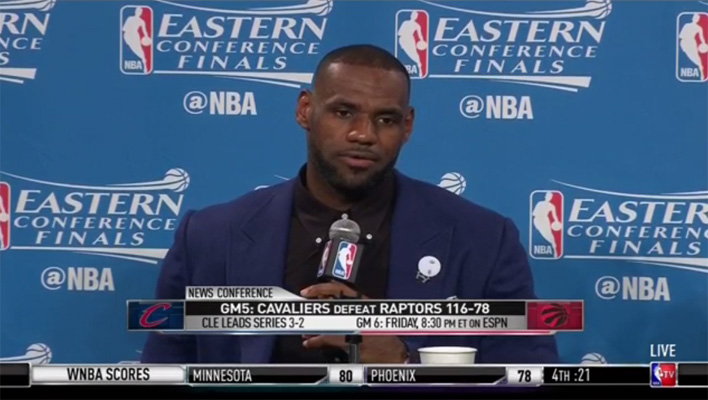 The Cleveland Cavaliers currently sit just one game away from their second consecutive NBA Finals appearance as they hold a 3-2 advantage over the Toronto Raptors.

One of the big reasons for that series lead is due to the play of superstar LeBron James. However, one might say that James hasn’t been aggressive in some of the games or hasn’t really “taken over” like he’s done in the past.

Well, that’s because of the emergence of both Kevin Love and Kyrie Irving in the playoffs. Watch as the four-time MVP explains in his own words.

"We didn't get to this point in our season by me taking over every game." -LeBron James https://t.co/NyTM4I8hYB

featuredkevin lovekyrie irvinglebron jamesnews ticker
← Previous Story Video: Cavs Fan Yells at Toronto Head Coach to Get Back to His Side of Court
Next Story → Video: LeBron James Says He’s Ready for One ‘Heck’ of a Game 6