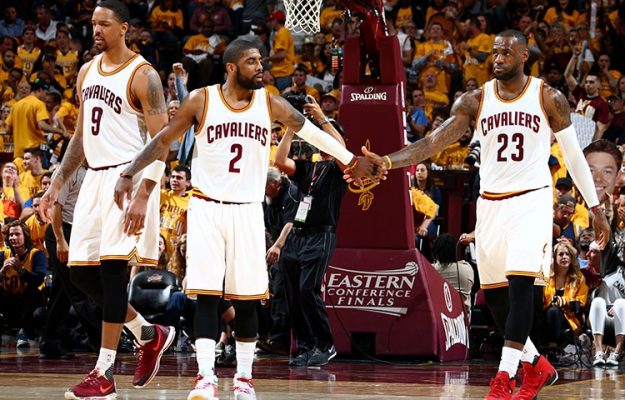 (Cleveland, OH) – Fueled by a triple-double from LeBron James, the Cleveland Cavaliers kept their postseason record perfect at 10-0 and took a 2-0 lead in the Eastern Conference Finals with a 108-89 victory over the Toronto Raptors at Quicken Loans Arena on Thursday night.

“When you’ve won like he (James) has, that record is just a tribute to the kind of player he is,” Cleveland head coach Tyronn Lue said. “He’s a winner.”

Kevin Love also contributed 19 points and five rebounds, while Tristan Thompson narrowly missed a double-double with nine points and 12 rebounds. Rounding out the Cavs’ scorers in double figures were J.R. Smith with 12 points and Channing Frye with 10.

“It’s always difficult to deal with me,” James said. “Kyrie and Kevin are in such a great rhythm that it gives me more space to make some plays.”

The key stretch of the game came with just over four minutes left in the second quarter and the game deadlocked at 46. Love’s basket lit the fuse for a deadly combination of offense and defense in the closing moments of the period that allowed the Cavaliers to close the half with a 16-2 run. That offense was bolstered by a defense that forced the Raptors to miss their last nine shots and 11 of their last 12. By the time intermission came, Cleveland found themselves leading 62-48.

“We just made some defensive adjustments and got more physical,” Lue said about the late run.

The Cavaliers defense kept up the pressure after the break, limiting Toronto to just 35 percent shooting from the field in the third quarter. That allowed the Cavs to bump up their lead by a point, taking an 86-69 lead into the final period.

“We want the Raptors to play our style of play,” Irving said. “We want to keep up the pace.”

In the fourth, the Raptors never threatened, with the closest margin being 16 at 99-83 with just over five minutes left.

“When Kyrie and Kevin are playing well, it opens up the floor for LeBron,” Lue commented. “On defense, we just want to protect the paint and keep them off the foul line.”

That latter effort was a success as Cleveland held a 37-18 advantage in free throw attempts on the evening. James got to the line 17 times, though he was only able to hit nine of his shots.

However, James’ overall performance didn’t go unnoticed by Thompson, who talked immediately after the game about his value to the team.

“One special human being, he elevates all of our games to play better and for us to play that much harder,” Thompson said. “It’s great to be part of the journey and that’s a bad man.”

The victory also gives the trio of James, Irving and Love a 14-0 record when they’ve played in the same game during the postseason.

“It’s something that’s been well documented, but it’s not something we think about,” Love said. “We just want to get better.”

Game 3 will be in Toronto on Saturday night, with tipoff set for just after 8:30 p.m. ET.