Why Kevin Love Has Been Key to Cleveland’s Playoff Success 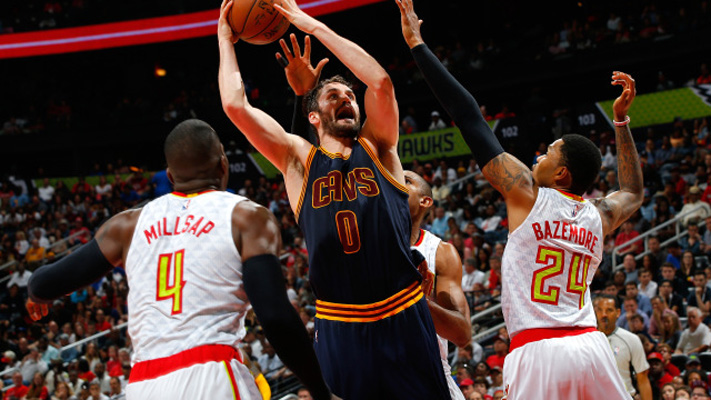 An aggressive Kevin Love is the right kind of Love. A passive Love is not.

Aggressive Love is what the Cleveland Cavaliers need on the court in order to win the 2016 NBA Finals. Passive Love is not.

In fact, I’d rather have the worst aggressive Love performance every night than the best passive Love on any given night.

And this isn’t because aggressive Love is all that much better than passive Love, because he’s not. They both pull down rebounds and hover around 45 percent shooting from the field. So what is the difference?

Ever since Tyronn Lue spoke with Love about becoming a more aggressive force on the court after a March 24 loss to Brooklyn, Love has been making the Cavs better every single game since, and that play has only expanded through the first two rounds of the 2016 NBA Playoffs.

Up to that game, the Cavs were 47-21 in games that Love suited up for. Since then, the Cavs have gone 14-3, including nine consecutive wins with Love on the floor. By that pace, by the time the Cavs have reached 21 losses, they would have amassed 98 wins, or good for a pace of 67-15 over a full 82-game schedule.

That right there is the mark expected of this Cavs roster that features a four-time MVP in LeBron James and a former No. 1 overall pick in Kyrie Irving.

But taking a look at Love’s stats, it would not imply that he has been a dominating force throughout all eight games in these playoffs. A closer examination of statistics and performances around him all point to the fact that Love is heavily influencing the outcome of these playoff games, even if he has an inefficient performance, like the 3-for-15 performance he had in Game 4 against the Detroit Pistons.

The emergence of the 3-point shot over the last few games against the Atlanta Hawks has much to do with Love’s aggressive offensive play. His willingness to fire from deep early in the contest has forced his defender to honor the shot.

With Irving and James slashing the defenses apart with drives to the hoop or pick-and-rolls, the off-ball defense has been forced to rotate into very vulnerable positions. Either stop James and Irving from embarrassing your team with a powerful slam or fancy finish, or allow them to pass to Love, J.R. Smith or even Channing Frye for a wide open 3-point look.

And again, Love has been shaky shooting the ball at times during these playoffs, but the ability is still there, and defenses absolutely must honor as well as actively defend against a 3-pointer from the three-time All-Star.

Just look at Game 1 against the Atlanta Hawks. Love was not great in the first half of that game, going just 1-for-10 in the first half. But because he stayed aggressive in the second half and continued to shoot the ball, he buried two clutch 3-pointers down the stretch and had several other small plays in order to help the Cavs secure an important win after nearly collapsing in the third quarter.

“At the end of the day, Kev didn’t shoot the ball exceptionally well, but he was getting great looks,” said James after the Game 1 win. “I just did not want Kev to second guess his ability to shoot the ball or to make shots. For me, as a facilitator, one of them on the team, it’s my job to get guys involved. With Kev being a big piece of our puzzle, it’s even more of my job to get him the ball, to get him some touches, and it was great to see the ball go in for him in the second half.”

But more than just maintaining his aggressive play and continuing to take shots, it is Love’s versatility on offense that truly allows the Cavs to flourish.

Traditionally, Love is a power forward, but actually can play four positions at times. He has already been played at center and small forward at times in the playoffs, but there are also times when the Cavs can use him as a shooting guard, setting screens for him and using him as an outlet to post play.

With James and Tristan Thompson in the game with Love, spacing down in the post can be a problem. But thanks to Love’s aggressive play as of late and his ability to roam freely around the perimeter, there have been no spacing issues. James gets to operate how he chooses to from the post, and Thompson gets set up in a one-on-one offensive rebounding situation, where he is one of the best in the league.

Furthermore, when Thompson exits the game, the Cavs can use Love at the center position and play an unbelievably potent form of small-ball. The lineup of Irving, James, Love, Iman Shumpert and Smith have only played 41 minutes together this season, but they have averaged nearly 14 more assists per 100 possessions than their opponents. For a team that averages 22.7 assists per game already, the Cavs would look like an old-school Princeton Offense with the number of passes made per game if this lineup saw some more court time.

Also with that lineup, the Cavs wouldn’t need to play small-ball if they didn’t want to, as both Love and James can operate from the post with such efficiency that it can feel like facing David Robinson and Tim Duncan in 1999.

Thanks to Love, the Cavs can play multiple styles of basketball in a single game, all without having to change the personnel on the court. No other team in the league has options like that.

Passive Love does not.