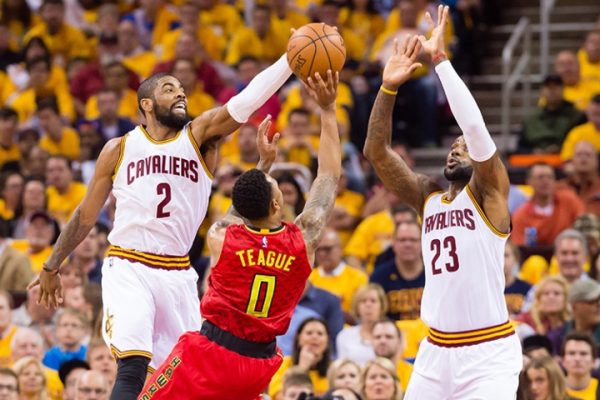 (Cleveland, OH) – Avoiding a second-half collapse against the Atlanta Hawks on Monday night, the Cleveland Cavaliers went on a 17-5 run in the final four minutes of Game 1 to start its Eastern Conference semifinal series on an up note.

The Cavs appeared to be in total control with just under four minutes left in the third period, leading 72-54. However, the Hawks ran off eight unanswered points and went on a 16-3 run to close the quarter, trailing just 75-70.

“They made some shots and got their confidence back,” Cleveland head coach Tyronn Lue said of the Hawks comeback. “You’ve got to give them credit, but I’m proud of the way our guys stuck with it.”

Continuing the push, Atlanta eventually took the first of its two leads in the entire game at 80-79 with eight minutes left to play. After the two teams traded baskets for the next few minutes, the Hawks took its final lead with 4:28 left to make it 88-87.

At that point, the Cavaliers clamped down on defense, not allowing Atlanta a made field goal until the final 20 seconds with the game in hand. That allowed Cleveland to run off 10 unanswered points to take a 97-88 lead with 1:40 left, with a three-pointer by J.R. Smith getting the rally going.

“We needed to make stops when it counted most and be resilient, ” Kyrie Irving said after the game. “You have to tip your hat to those guys (Atlanta) for the effort they put out. We know we have to get better going into Game 2.”

A key three-point play by LeBron James proved to be one of the key stretches during the surge. The scoring play was aided by two important offensive rebounds, which was somewhat ironic, considering that Atlanta had controlled that category for much of the game.

“We needed everything tonight,”James remarked. “We needed all the extra possessions we could get.”

James had a team-high 25 points, adding nine assists and seven rebounds, while Irving added 21 points and eight assists. Seven of those Irving’s points came consecutively during a crucial stretch that allowed the Cavaliers to keep pace.

“Coach Lue stayed on us and we finished up the right way,” James said afterwards.

While Kevin Love collected a double-double with 17 points and 11 rebounds, he endured a miserable night from the field, hitting on just 4-of-17 in the field-goal department. Smith was the only other Cleveland player to score in double figures with 12, while Tristan Thompson came close to his own double-double with eight points and 14 rebounds.

“He (Love) missed some shots he ordinarily makes, but I told him to keep shooting, keep being aggressive,” Lue said. “We’re going to keep going to him.”

Game 2 of the series will again take place at Quicken Loans Arena on Wednesday night, though this contest will tip off shortly after 8 p.m.