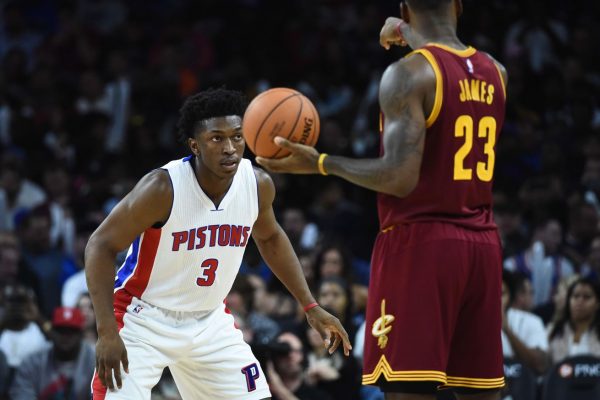 The seemingly one-sided war of words between the Detroit Pistons and the Cleveland Cavaliers’ LeBron James continued after Wednesday night’s 107-90 Cavalier victory, with Pistons rookie forward Stanley Johnson giving his own interpretation of his defensive effort against the 13-year veteran as well as making a string of other volatile remarks.

“I’m definitely in his head, that’s for sure,” Johnson said. “I could care less if I’m in his head or in his mind or anything like that. I’m just trying to play basketball. It’s up to him how he wants to react to whatever he does. I think I’m in a good place. He had a great night. He’s had a couple great nights. He made a couple tough-ass shots.”

James was a perfect 6-of-6 from the field on Wednesday with Johnson covering him and has hit 7-of-9 shots during the two games in those same circumstances, according to ESPN Stats & Information.

“He hit two 3’s, which is not, like, his norm. He hit a tough-ass turnaround on me, and he played really physical. I battled physical,” Johnson commented. “He didn’t get any paint touches. He made a bunch of tough shots. So he’s going to have to go 40 minutes and make those same tough shots every game for them to do what they did tonight.”

During the course of his comments, Johnson took exception to a first-quarter bump between him and James.

In conjunction with that, Johnson was also upset about the timing of James’ on-court remarks to him.

“I wish he would just talk when (the game) is 0-0, not when he’s up 16,” Johnson said. “I think that’s more — that means something. That means you’re confident in yourself. You believe what you’re about to do. Don’t talk after you made a couple shots. Anybody can do that.”

In his own postgame comments, James wasn’t looking to get drawn into any back-and-forth banter and remains focused on winning two more games and advancing in the postseason.

“For me, like I always tell you guys, the game is played in between the four lines, and everything outside that means absolutely nothing,” James said after Cleveland’s Game 2 victory. “I’m just happy I’m able to be in a position where I can lead this team and try to make plays for myself, make plays for my teammates and come out the way we did tonight.”

Despite that approach, Johnson broadened his attack by saying that James and the Cavaliers team as a whole is guilty of trash-talking.

“He jabbers, he moves his mouth sometimes. Their whole team does, kind of like their little cheerleaders on the bench,” Johnson said. “Every time you walk in the right corner. They’re always saying something like they’re playing basketball, like they’re actually in the game. There’s only seven or eight players who play. I don’t see why the other players are talking. They might as well just be in the stands, in my opinion.”

While Johnson has respect for James’ stature in the game, he said that he’s refused to be intimidated by the fact that he’s a rookie facing a future Hall of Famer.

“Why would I be?” Johnson said. “He laces his shoes up the same way I lace my shoes up. He has to come out there and compete and make his shots. He doesn’t come prepared. That’s the NBA. Anybody and everybody can get busted any night. From the last guy on the bench to the first guy out. He’s going to have to strap his shoes in every night tight because I’m going to strap my shoes in every night tight.”

Game 3 of the series will take place on Friday night at the Palace of Auburn Hills, with tipoff set for just after 7 p.m. ET.