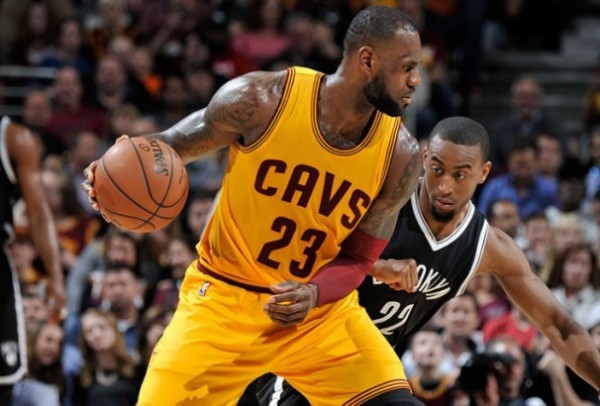 (Cleveland, OH) – Fueled by a 27-6 second-quarter run, the Cleveland Cavaliers were able to get revenge on the Brooklyn Nets while also wiping away the bad taste from Tuesday night’s loss in an easy 107-87 victory at Quicken Loans Arena on Thursday night.

“I think we followed the game plan that the coaches set up and executed for as close to 48 minutes as possible,” said LeBron James, who led all scorers on the night with 24 points.

James and Kevin Love each contributed double-doubles to the Cleveland cause. James had 24 points and 11 assists, while Love had 19 points and hauled down 10 rebounds, connecting on four three-pointers. Three other Cavs players reached double figures in scoring, with Channing Frye hitting for 13, while the duo of Timofey Mozgov and Kyrie Irving finished the night with 10 apiece. Frye also grabbed seven rebounds.

“I put a lot of pressure on myself to win every game. Everyone tells me to relax, but I know what kind of opportunity we have here and I want to take advantage of it,” Frye said. “Every shot is extremely important to me. They tell me to relax and I’m a fun guy, but I love winning.”

With 7:42 left in the first half, the Cavaliers held a slim 36-33 advantage of what had been a closely-contested game with the Nets. Scoring 10 unanswered points over the next four minutes, the Cavs then continued to boost their lead until they went to intermission leading 63-39.

“In the first half, I thought we played great defense,” said Cavaliers head coach Tyronn Lue. “We wanted to take care of this team early tonight, so that we have our legs for tomorrow.”

Throughout the first half, Cleveland was aggressive taking the ball to the hoop, hitting 16-of-20 from the free-throw line during the first two quarters. The Cavaliers defense also went to work as they held the Nets to 26 percent in field-goal attempts during the second period.

Once play resumed, the Cavs increased their lead to as much as 28 during the third quarter and never let the Nets get within 20 the remainder of the game. Then, as garbage time took hold in the fourth quarter, Cleveland led by as many as 32 before they emptied their bench.

The Cavaliers had little need to go to the foul line after the break, but continued to show excellent ball movement by finishing the evening with 29 assists. In addition, they held the Nets to just 37 percent in field goal-attempts for the entire game.

“Our guys did an unbelievable job of getting downhill,” Irving said.

The win helps boost the Cavs’ season record to 53-22 and increases their lead over the Toronto Raptors for the top seed in the Eastern Conference to 2.5 games with seven contests remaining. The victory also matches their win total from last season.

“We’ve played down to some teams and lost some tough games,” Love said after the game. “But it’s good that we’ve been able to reach that level with some games left.”

James also continued his movement up the all-time scoring ladder, passing Atlanta Hawks legend Dominique Wilkins to move into 12th place in NBA history. James has a strong opportunity to move up to 11th place on Friday night, since he now is only 21 points behind another legend, Oscar Robertson.

The Cavaliers get back on the court Friday night for a road clash against the Hawks in a nationally televised game set to tip off just after 8:00 p.m. ET on ESPN.