Cavaliers vs. Knicks Game Recap: LeBron’s Triple-Double Gets Cavs Back on Track 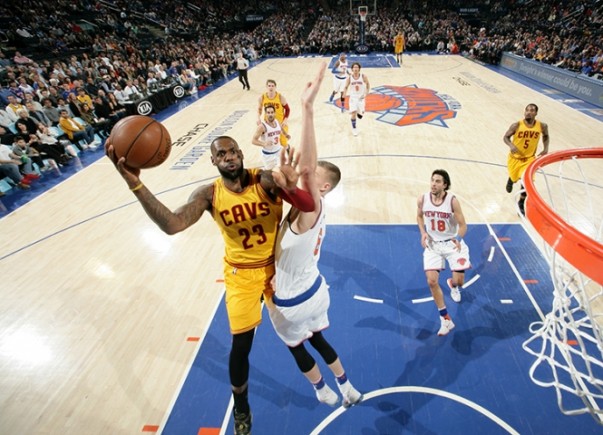 (New York, NY) – LeBron James collected his 42nd career triple-double and his second this week as the Cleveland Cavaliers recovered from an embarrassing Thursday night loss to handle the New York Knicks by a 107-93 score at Madison Square Garden on Saturday night.

“Our team is predicated on me breaking down the defense, Kev getting into the post, Kyrie getting into the defense, but then allowing our shooters to also have some space,” James said. “There’s a fine line between how many threes we take and how much we get into the paint and tonight we did a good job of mixing it in.”

Ending the evening with 27 points, 11 rebounds and 10 assists, James’ performance overshadowed a strong effort by Kevin Love, who led all scorers by notching a double-double with 28 points and 12 rebounds. Others scoring in double figures were J.R. Smith with 13 points and Matthew Dellavedova with 10.

James talked after the game about Love’s performance:

“Obviously, we knew that everyone had to step up in the absence of Kyrie and Kev did that,” James remarked. “Delly started and then Mo gave us some big minutes, but Kev was spectacular all game.”

Despite his strong performance on offense, Love spoke more after the game about the team’ defensive effort:

“Our transition defense was one of the focal points that we wanted to do well in and I think we did that tonight.”

Using shutdown defense on a weak opponent during the first half brought the expected results for the Cavaliers. They effectively put the game away with a 36-17 run over the final 15 minutes of the first half. That surge began by scoring the final 12 points of the opening quarter and continued throughout the second period.

Cavs head coach Tyronn Lue spoke about what he had told his team before the game and concurred with Love in one aspect:

“I challenged them to get physical and get back on transition defense,” Lue commented. “I think we did that tonight, since I think they only had two points in transition tonight.”

By halftime, Cleveland had built up a lead of 56-32 and defense became something of an afterthought in the third quarter, with the Cavaliers allowing 40 points compared to their 33 on offense. That made it 89-72 after three periods.

“I think our first half, we took five steps forward. Third quarter, we took two steps backward, so at the end of the night, being three steps above where we were the other night is a good sign,” James said. “No way, shape or form are we allowed to ever give up 40 points in a quarter, which we did in the third. But, for the most part, for 48 minutes, we played a really good game.”

The Knicks twice got the margin down to 10 with just under five minutes left in the game. However, eight unanswered points over the next two minutes, including five from James eased any fears of a late-game collapse.

James had spoken earlier in the day about his confidence in the Cavaliers once the postseason begins and Love spoke about the impact it had on the team:

“It’s LeBron James saying that he had that kind of confidence in us, so when you hear that, he’s our leader,” Love remarked. “At the end of the day, it starts and ends with him and we follow him. So we all believe that we can make something special happen here.”

The Cavaliers return to action on Tuesday night when they host the Houston Rockets in a game that will get underway at a special starting time of just after 8 p.m. ET. Back on January 15, the Cavs won in Houston by a 91-77 score.