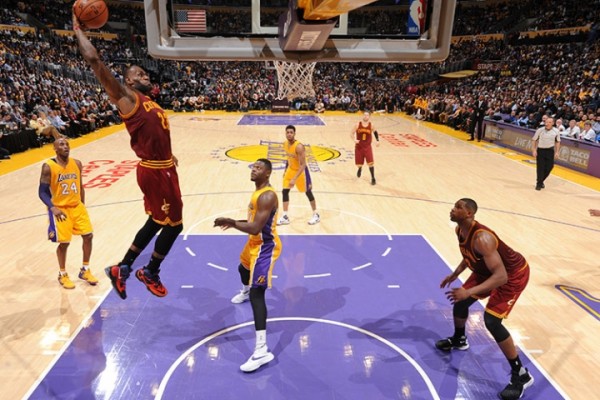 (Los Angeles, CA) – Using the three-pointer to their full advantage during the first three quarters helped the Cleveland Cavaliers win for the second night in a row as they defeated the Los Angeles Lakers, 120-108, on Thursday night at Staples Center.

The Cavaliers finished the night with 16 three-pointers, coming up two short of their season-high of 18 in a November 23 victory over the Orlando Magic. During the first two quarters, Cleveland went 10-of-19 from downtown. Then, in the third quarter, they drilled 5-of-11 before dialing it back in the final period with just 1-of-4 made from long range.

Kevin Love sat out the contest, but Channing Frye flourished in his first start with the Cavs, scoring 21 points, including five three-pointers. Frye, one of six Cavaliers to score in double figures, went 8-of-10 from the field on the night. He missed just two of his long-range efforts and also added seven rebounds.

Frye offered a simple response to his night:

“I was just shooting when I was open and my teammates got me the ball.”

“It was great that he got us going in the first quarter,” Lue said. “He helped us space the floor.”

LeBron James and the retiring Kobe Bryant battled all night in their last-ever meeting, with James scoring 24 points compared to Bryant’s 26 on the night. However, James also added seven assists and five rebounds.

James used the word “fierce” to describe Bryant’s playing mentality and spoke about how each player approached the contest:

“For a competitor like him, I know he was not taking this game off for sure, and I definitely wasn’t taking it off,” said James.

Kyrie Irving led all scorers with 26 points, while also adding nine assists. For Irving, it marked the seventh game in a row in which he’s scored 20 points or more. He spoke after the game about playing against Bryant for the final time and his impact on the game:

“It’s emotional, knowing what he’s given to this game,” Irving said. “Knowing the impact he’s had not only on a generation such as mine, but the generation after and the generations to come.”

Other Cleveland players scoring in double figures included J.R. Smith with 17, including four three-pointers. In addition, Tristan Thompson added another double-double with 10 points and 14 rebounds, while Matthew Dellavedova scored 11 points.

With the exception of the final four minutes of the first quarter, the Cavaliers were on target during most of the first half. Leaving out the six missed attempts to close out that first period, Cleveland scored on 64 percent of their shot attempts over the other 20 minutes of the opening half.

Holding a 64-55 advantage at intermission, the Cavs never allowed the Lakers to get within eight for the rest of the game. As the final quarter began, the Cavaliers led by a 95-82 score, with the Lakers not able to make any type of serious run.

James joked afterwards about a dunk that was set up by Smith during the game that he made with his left hand:

“It was an awkward toss, I wasn’t expecting it,” said James. “There’s nothing worse that missing a dunk like that on the road.”

As pleased as Lue was with the win, he still saw plenty of room for improvement with regard to the offense:

“We have to start to get ready (for the postseason) and we need to pick up things faster,” Lue said.

The win improves Cleveland’s record to 46-18, while the miserable season for Los Angeles plods along at 14-52. For the Cavs, it also helps them maintain a 2.5 game lead over the Toronto Raptors for the best record in the Eastern Conference

The Cavaliers will have a few days off in Los Angeles before facing the Clippers on Sunday afternoon in a game set to tip off just after 3:30 p.m. ET.