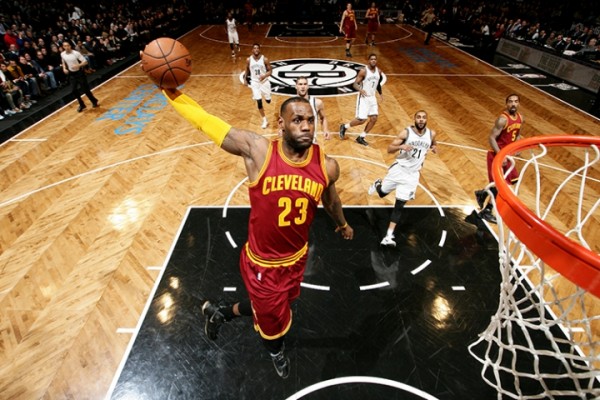 (Brooklyn, NY) – Consistent shooting for most of the night got the Cleveland Cavaliers back on winning track as they methodically built up a commanding lead to defeat the Brooklyn Nets, 91-78, at Barclays Center on Wednesday night.

Two nights removed from their disastrous performance against the Golden State Warriors, that consistency showed most clearly in Cleveland’s field goal shooting. For each of the first three quarters, the Cavs shot exactly 50 percent, before cooling off to just 38 percent with the game mostly in hand.

Their defense held the Nets to under 80 points, the fifth time they’ve held an opponent under that number this year and the second straight victory that they’ve achieved that milestone.

Cleveland head coach David Blatt was asked about what was behind the team’s ability to bounce back so quickly:

“Our guys reaching down and realizing that we had to get back up,” said Blatt.

Kevin Love and LeBron James each had a game-high 17 points, but Love also garnered a double-double by contributing 18 rebounds. Tristan Thompson added his own double-double with 14 points and 10 rebounds, while Timofey Mozgov scored 11 for the evening.

Love spoke of the team’s need to get off to a good start:

“We came out, we played hard and we attacked early,” said Love. “It was a big effort to get into a rhythm early, but I got a little more arc on the shot and got to the foul line more often.”

Blatt was pleased with Love’s performance:

“I was happy that Kevin came out with a great mindset and had a strong game,” said Blatt.

After some back-and forth play between the two teams that saw the game tied six times in the first seven minutes, the Cavaliers took the lead for good on a layup by James with just over four minutes left in the opening quarter.

Holding a six-point advantage after one period, the Cavs slowly took control of the contest, using a 21-10 run over an eight minute span to take a 49-34 lead with 1:21 to go before intermission. Shortly after that, the halftime horn sounded with Cleveland in front by a 51-38 score.

Speaking about the tone his opening basket (a dunk) set for the team, James said if offered a message:

“We definitely wanted to get off to a great start and we were able to do it,” said James.

Brooklyn was able to get their deficit briefly under double digits after the break, but an 18-8 run over the rest of the period helped the Cavaliers hold a 73-55 advantage with one quarter left. In the final quarter, the Cavs took their biggest lead at 85-62 with 7:04 remaining before taking their foot off the gas.

James was asked about the effort to offer Love, Kyrie Irving and him equal shooting opportunities:

“We want to move the ball from side to side, and whoever’s open can take shot,” said James.

The large lead allowed Mo Williams to see action in the fourth quarter after having most of the last few weeks off, though rust was evident in his 1-for-7 shooting in six minutes of action.

Blatt spoke about the game being a first step back:

“We have to keep working and doing the things we did today,” said Blatt.

Asked about how other teams now view the Cavs, James wasn’t overly concerned:

“We have a lot of room for improvement, but we’re a good team,” said James. “I wish teams would forget about us, the league forget about us. That way, I can fly under the radar.”

The Cavaliers now begin a stretch of 10 home games over the next 13 matchups, beginning with the Los Angeles Clippers on Thursday night. They’re currently second in the Pacific Division behind Golden State, and have won 11 of their last 12 matchups. Tipoff for the game, which will be broadcast nationally on TNT, will be just after 8 p.m. ET.