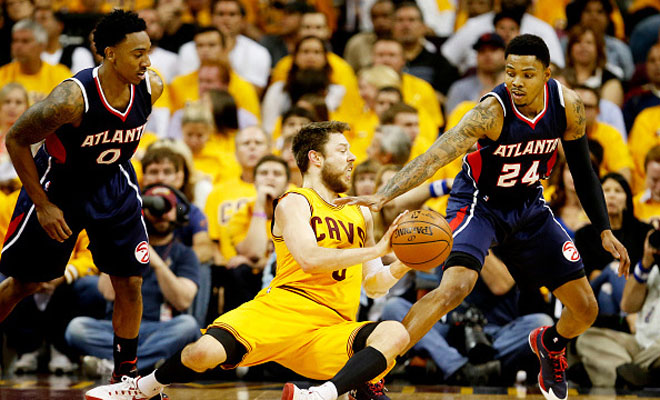 According to his peers, Matthew Dellavedova is the dirtiest player in the NBA.

Via a new poll by Broderick Turner of the Los Angeles Times, 24 players, head coaches and assistants were asked who was the dirtiest player in the league. According to Turner, Dellavedova received 13 votes:

It’s worth noting that each participant in the poll was allowed to vote more than once.

The Cleveland Cavaliers guard began to earn a reputation as a “dirty” player during the 2015 NBA Playoffs. He injured Atlanta Hawks guard Kyle Korver while diving for a loose ball and also drew flagrant 2 fouls from the Hawks’ Al Horford and the Chicago Bulls’ Taj Gibson, getting both of them ejected.

When it pertains to the discussion of whether or not Dellavedova is indeed a dirty player, opinion varies based upon who you ask. One Eastern Conference assistant disagrees with the notion that the undersized guard is a dirty player:

On the other hand, you have one Western Conference coach who fully believes Dellavedova is a dirty player, because he injures people:

“He’s as dirty as they come. When you’re hurting people, that is not OK.”

Regardless of one’s opinion on the matter, Dellavedova has emerged as a known name after his performance in last year’s playoffs. The 25-year-old has carried that momentum into the 2015-16 season, as his scoring, assist numbers and playing time have all increased in comparison to last season.

The Australian guard is averaging 8.3 points and 4.9 assists in 27.4 minutes per game this season.