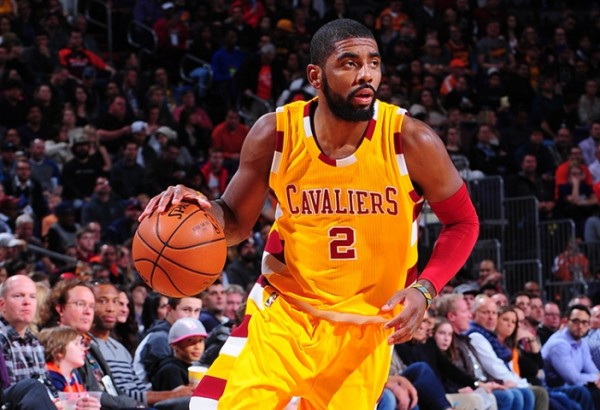 (Phoenix, AZ) – Kyrie Irving’s three-pointer with 21.9 seconds remaining helped the Cleveland Cavaliers hold off a late charge by the Phoenix Suns and subsequently put an end to the team’s two-game losing streak as they emerged with a 101-95 win at Talking Stick Resort Arena on Monday night.

Cleveland held a 92-84 advantage with 4:36 left in the game, but Phoenix used an 11-3 run to get within one at 96-95 with 1:28 left. Then, with 46.6 seconds remaining, Brandon Knight appeared to have given the Suns a 98-96 lead on his second straight three-pointer, but the three was disallowed due to an offensive foul called on teammate Tyson Chandler.

Irving then launched his three as the 24-second clock was running out to make it a four-point spread. After Iman Shumpert then forced a turnover, Irving put a cap on the win by connecting on a pair of free throws to give him a team-high of 22 points for the night.

Joking about his big shot afterward, Irving gave a unique description of the sequence leading up to it:

“Probably one of the ugliest possessions we’ve had, but we got a score when we needed it,” said Irving.

Joining Irving in double figures in the scoring column were Smith with 17 points and three rebounds; Kevin Love with 16 points, seven rebounds and four assists; and LeBron James with 14 points, seven assists and four rebounds.

James achieved another milestone in his storied career, passing Alex English to move into 17th place among the league’s all-time scorers. James now has 25,623 points in the midst of his 13th season .

Entering that final quarter, the Cavs held an 81-73 advantage and were able to let the Suns get no closer than five until that final surge began.

Blatt made one change in the starting lineup, giving Tristan Thompson the start at center and having Timofey Mozgov come off the bench. Thompson finished with five points, but also grabbed 10 rebounds, while Mozgov contributed four points and four rebounds.

Asked about the lineup change, Blatt spoke of a need for more speed:

“I felt we needed to be faster to start the game, be a little more mobile,” said Blatt. “I wanted to inject some energy.”

Irving said after the game that the switch wasn’t any cause for concern in regards to team chemistry:

“Any lineup, any change, nobody takes it personally,” said Irving.

Unlike the Cavaliers’ last few games, the first half saw the offense hit just under 62 percent of their shots, including 58 percent of their 19 attempts from beyond the three-point line. By the time the game ended, the team had made 17-of-41 from long range, finishing with an overall shooting percentage of 47 percent.

Love spoke about the Cavaliers’ approach to defending Phoenix:

“You can’t get into a track meet with them,” said Love. “I thought we could have done a better job on defense.”

James attributed the offensive improvement to the team’s ability to move the ball around:

“We were moving the ball well tonight,” said James. “We had good rhythm.”

The Cavs look to close out their rough four-game-in-five-night Western swing with another victory on Tuesday night when they travel to face the Denver Nuggets in a game set to tip off just after 9 p.m. ET. Irving will sit out the contest in order to continue making sure that the rigors of playing in back-to-back contests don’t result in any potential recurrence of the injuries that plagued him in the latter half of last season.