Don't Miss
Home / Media / James Jones on LeBron: ‘I Want to See Him Be the Greatest Basketball Player to Ever Play This Game’

James Jones on LeBron: ‘I Want to See Him Be the Greatest Basketball Player to Ever Play This Game’ 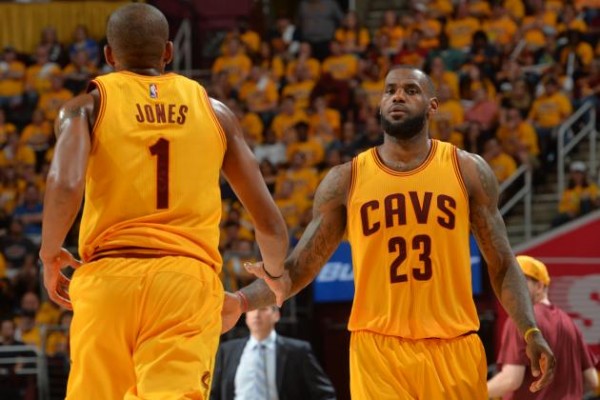 In July 2014, LeBron James came back to play for the Cleveland Cavaliers after four seasons with the Miami Heat, leaving some teammates he was very close to, including guard Dwyane Wade.

However, according to Dave McMenamin of ESPN, it appears the teammate James treasured the most was veteran reserve James Jones. James spoke to McMenamin after Jones had closed out the team’s blowout win over the Magic with 15 points, including four three-pointers in the final quarter.

“He’s my favorite player of all time,” said James, when asked what he thought about Jones

That’s an indication that a player’s stature in the game doesn’t serve as James’ measuring stick, considering he grew up as a Michael Jordan fan, has been described as this generation’s Magic Johnson and has been teammates with both Wade and Shaquille O’Neal.

In contrast to that group of Hall of Famers and future Hall of Famers, the 35-year-old Jones’ career numbers show that during his 13 seasons with four different teams, he’s averaged 5.5 points and 1.9 rebounds per game.

Expanding on the player nicknamed, “Champ,” James said of the lofty designation given to Jones:

“I told J.J., as long as I’m playing, he’s going to be around,” said James. “He’s not allowed to stop playing basketball. So, I’m going to make sure I got a roster spot for him. I love him. He’s the greatest teammate I’ve ever had.”

Of course, there’s mutual admiration in this case:

“He already knows it’s a reciprocation because he’s my favorite player ever,” said Jones.

When James left to return to the Cavs, he spoke to Jones, who was disappointed about the pending departure, but understood the pull:

“I told him, as a Miami guy, I was a little heartbroken, but as a brother and a teammate, I’m ecstatic that he’s doing what’s best for him and his family,” said Jones.

Soon after, James began to push for Jones to come to Cleveland as a free agent:

“I thought about the possibilities knowing that it would be tough, that it would be a roller coaster,” said Jones. “But I think I was seeking that thrill again, so I made the decision to come up here.”

Having grown up in Miami, Jones knew what the extra excitement that came with winning an NBA title in his hometown was like. So he wanted the same for James:

“He knows I’m eternally indebted to him, and most importantly, because he’s done that for me, the only thing I want to see him be is the greatest player ever to play this game,” said Jones. “And not just a great basketball player, but a man, a father, a husband, an individual, an icon. And so, that’s why we share that bond, because I told him my goal, my focus here is to win championships and to help him build his legacy so that he’s iconic.”

Jones is motivated to make sure that James moves past players such as Jordan in NBA lore:

“When they think about the greatest player to ever play the game of basketball and one of the greatest athletes to ever impact the sport or impact the world, I want that to be him and no one else,” said Jones.

Raising the Larry O’Brien trophy next June would certainly cement James place in Cleveland sports history, something Jones is preparing for each day.