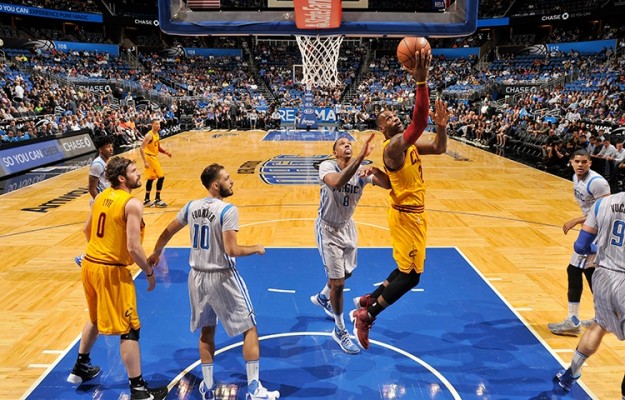 (Orlando, FL) – Using 19 unanswered points in the third quarter to blow the game open, the Cleveland Cavaliers were able combine solid defense and superb ball movement to coast to an 111-76 road victory over the Orlando Magic at Amway Center on Friday night.

The victory improves the Cavs’ record to 15-7 for the season and drops the Magic to 12-11.

The Cavaliers actually began to take control of the game in the second quarter, using a 17-3 run to lead by 20. However, it was 19 straight points after the break that officially put the game away to make it 73-41. The Cavs eventually led by as many as 40 at 109-69 during garbage time in the fourth quarter.

A look at the overall shooting numbers during the second and third quarters offers clear evidence of how the Cavaliers were able to dominate. Cleveland shot 62 percent over the 24-minute span, while holding Orlando to just 35 percent during the same time period, allowing them to outscore their opponents, 61-32.

Cavaliers head coach David Blatt was obviously happy about the team’s effort in his postgame comments, but noted the team had a subtle edge:

“I thought we played a full game, but to be fair, Orlando was back from a Western road trip, playing their third game in four nights,” said Blatt.

That second quarter push was led by LeBron James, who collected 16 points during those 12 minutes, ending the game with 25 points, eight assists and four steals. Nine of the 19 points in the third quarter run came via Timofey Mozgov, who bounced back from some sluggish performances for 17 points and four rebounds. Many of his points came on feeds into the paint, part of the 24 assists the Cavs dished out on the night.

James commented afterward about the need to establish a steady presence and the value of defense:

“We want to continue to play our game, keep our rhythm and maintain our consistency,” said James. “When we lose, it’s because we don’t play well defensively.”

Mozgov spoke after the game about his recent struggles:

“I’ve had a hard time recently, but I only know one way to play: just to go forward,” said Mozgov. “When we win games like that, we have fun.”

“I like that he’s pushed through and worked hard,” said Blatt. “Obviously, when he plays like that it’s a big thing for our team.”

At least part of the greater focus on defense could be attributed to the season debut of guard Iman Shumpert, who entered the game with 6:05 left in the first quarter. By the time the game ended, he had 14 points on five of seven from the field in a little under 25 minutes of action.

“I’ve been waiting for somebody to hit me,” said Shumpert. “I know that sounds crazy, but I got sick of play one-on-none and five-on-none.”

“I’m the crazy brother who puts the battery in him, I guess,” said Shumpert.

The game situation actually limited Shumpert’s time on the court, which Blatt noted:

“I wanted to play him more, because he looked so good,” said Blatt. “He kept himself in great physical shape, and we have to know that Shump has been away from physical basketball for a long time. It doesn’t look like he ‘s missed a beat.”

“He had great rhythm, considering he was coming off an injury to his shooting hand, ” said James.

The presence of Shumpert was needed because the Cavaliers were without the services of J.R. Smith, who didn’t travel with the team due to illness. His status for Tuesday night’s contest in Boston is uncertain.

One player, who had a quiet night, but came close to a double-double was Kevin Love, who tallied just eight points, but grabbed 13 rebounds. Meanwhile, veteran James Jones scorched the net during the fourth quarter with four three-pointers to close with 15 points on the evening.

Love talked about the effective play for both the offense and defense:

“I felt we did a great job on both ends of the ball,” said Lovc. “We continued to move the ball around and we were working together.”

James was effusive in his praise of Jones, who also played with him during his Miami Heat days:

“He’s my favorite player of all-time,” said James. “He’s a guy who works on his craft every day.”

As previously noted, the Cavaliers will next be playing on Tuesday night in Boston for a 7:30 p.m. ET matchup.