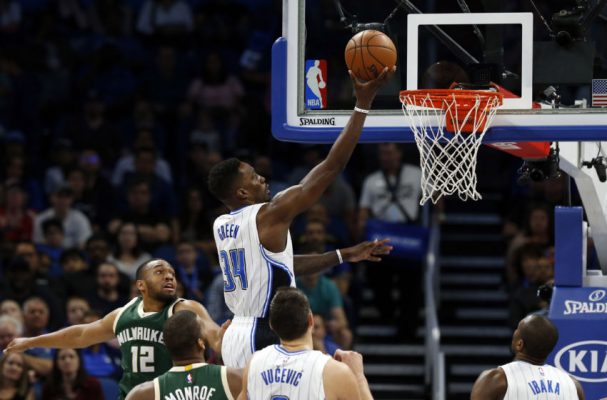 On Friday, forward Jeff Green signed with the Cleveland Cavaliers for one year at the veteran’s minimum, $2.3 million. Contrary to previous beliefs, LeBron James had actually talked with some free agents, including Green and guard Jamal Crawford, about coming to Cleveland.

LeBron James had active conversations with Jeff Green before decision to sign with Cavs, sources said.

There have been mixed reactions to the versatile Green signing, and frankly, for good reason. While he’s been a highly capable, even a very good player for stretches, he’s seen as a frustrating underachiever. As an undersized power forward, his ability to drive on bigger players and post up small forwards should’ve allowed for long stretches of great play.

His game was tailor-made for today’s league, but he hasn’t taken advantage. The Ringer’s Jason Concepcion nailed this point home, even if a bit harsh.

Now, that we understand that James basically checked off on the signing, let’s look at Green’s game and how it meshes with the current roster. The following may surprise some.

Green’s primary ability is putting the ball in the basket. At 30 years old, there’s reason to believe he has a little bounce left, despite recent stumbles with the Orlando Magic and Los Angeles Clippers. First, playing with James, Kevin Love, and Kyrie Irving, he’s going to be more open than he’s ever been in his career.

A serviceable deep bomber, he’s a career 33.3 percent three-point shooter. James will put him in numerous winning situations, including doing what Green does best — put that bounce to use and explode at the basket. Additionally, he’s a good free-throw shooter at a 79.2 percent career clip.


1Next Page »
cleveland cavaliersfeaturedjeff greennews ticker
← Previous Story Four Perimeter Players Cavs Should Target Instead of Jamal Crawford
Next Story → Dear Dan Gilbert: It’s Time to Do Everything in Your Power to Save LeBron’s Legacy and City of Cleveland