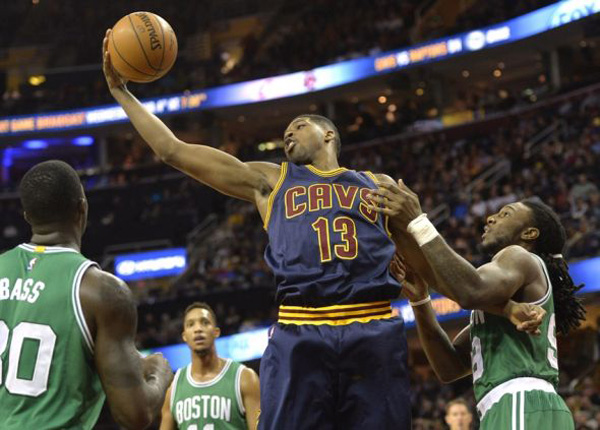 It is well-known what Tristan Thompson’s role is on the Cleveland Cavaliers.

Thompson’s objective is to rebound the basketball. While LeBron James and Kevin Love are carrying the offensive scoring load, Thompson is simply dominating on the glass. Through 21 games and just three starts, the 6’9″ big man is averaging 9.9 boards.

Considering he plays just 27.2 minutes per game, that is an astonishingly high rate. If you average those numbers on a per 36-minute basis, Thompson would be averaging 13.1 boards a game.

However, let’s delve into the bigger picture here. The 24-year-old is a player coming off of the bench, and barring a major change in the lineup, it’s likely he’ll remain a player appearing off the bench for the remainder of the season.

Looking at Thompson’s numbers from a historical context demonstrates just how impressive he has been this season. For players who have started fewer than 20 games in a season, Thompson’s current rebounding average would rank third in NBA history.

Just who owns the record? None other than Roy Tarpley, who averaged 11.8 rebounds for the Dallas Mavericks during the 1987-88 season while only starting nine games.

Thompson doesn’t hide why he has been so successful at rebounding the rock so far this season:

“Just because I wasn’t in training camp doesn’t mean I wasn’t working. I was still getting my work in, getting better, getting stronger and staying in shape and staying ready because you never know when you get that phone call saying to get back to work.”

The rebounding specialist stressed that just because he didn’t join training camp at the same time as his teammates, it doesn’t mean he wasn’t well-conditioned entering the season:

“For me, just because I wasn’t in training camp didn’t mean it was a longer vacation. It meant I had to work just as hard because I knew these guys were going two-a-days and I had to make sure that whenever I returned, I had to be just as good or in better shape than everyone else here.”

Former New Jersey Net Jayson Williams grabbed 10.0 rebounds per game during the 1995-96 season. He started just six games that year, and ranks second on the list based upon the criteria given.

With James and Love nabbing rebounds themselves—Love leads the team with 11.0 rebounds a game, while James averages 7.9 boards—it might be far-fetched to predict that Thompson will break the record set by Tarpley nearly 30 years prior.

Just don’t count on Thompson to make any bold predictions regarding the rebounding record:

“We’ll see if I can get there. I’m not going to change my game. It’s gotten me this far already.”

Whether or not he breaks the record, there is no doubting his ability to dominate the opposition on the glass.