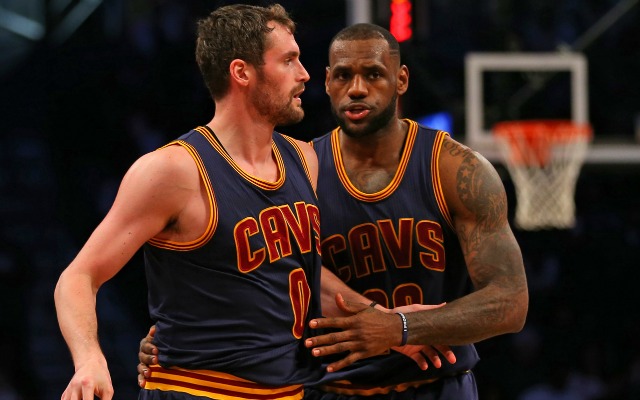 When Kevin Love struck a deal with the Cleveland Cavaliers last summer, it was with the intention that he’d be just as big a part of the Cavs’ new “Big Three” as was LeBron James and Kyrie Irving.

However, those terms didn’t exactly come to fruition as James and Irving dominated the offense for much of the season, leaving Love to be the odd man out.

Not only that, but James and Irving’s relationship seemed to thrive both on and off the court, while the relationship between Love and LeBron was average at best.

According to Jason Lloyd of the Akron Beach Journal, there was supposedly a reason for why James treated Love strangely both on and off the court:

“In truth, James was frustrated in part because Love showed up out of shape. He didn’t work out much at all the summer he was traded here and he wasn’t the player James was expecting. His legs bothered him all season. His back was hurting. All of the parts were connected and none of them were firing properly.

“James loves talent and he loves playing with elite talent. Love’s physical condition prevented him from being the player James thought he was getting. As a result, James gravitated toward Kyrie Irving and Love never fit well into this system.”

Love and James seemed to get on track late last season and with LeBron even preaching this season that Love needs to be the “focal point” of the Cavaliers offense, everything seems to be patched up…for now.

featuredkevin lovelebron jamesnews ticker
← Previous Story Cavs Rumors: LeBron James in Jeopardy of Missing Season Opener Due to Sore Back
Next Story → Cavs Rumors: Kyrie Irving Could Be Back ‘in a Couple of Weeks’