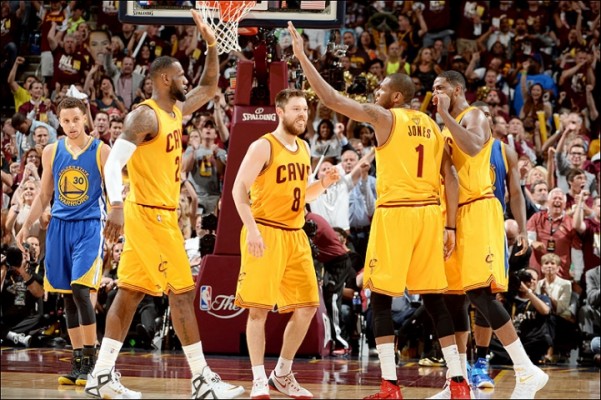 (Cleveland, OH) — In what has become an absolutely incredible response to adversity, the Cleveland Cavaliers (2-1) put forth a magnificent team effort en route to a 96-91 victory in Game 3 of the 2015 NBA Finals over the Golden State Warriors (1-2) at Quicken Loans Arena on Tuesday night.

Yet again, Cleveland’s superstar forward in LeBron James paced the way in an inspired effort from him and his Cavs teammates, as the two-time NBA champion and 11-time All-Star exploded for 40 points (14 of 34 shots made from the field and 10 of 12 free throws made) to go along with 12 rebounds, 8 rebounds, four steals and two blocked shots.

“We’ve got some learning to do,” said James after the game. “I’ve always said about this team, based on your life’s experience and that minute and a half, we’ve got a lot to learn from.”

The Cavs, who continue to flex their muscles on defense throughout the end of the regular season into the playoffs, managed to build a 20-point lead over the Warriors in the middle of the third quarter.

Cavs backup point guard Matthew Dellavedova, who continues to establish himself as a folk hero among Cavaliers Nation after All-Star Kyrie Irving‘s devastating knee injury in Game 1 of the NBA Finals, put up quite the inspired performance in front of the Quicken Loans Arena crowd on Tuesday night. The Aussie stepped up en route to 20 points (seven of 17 from the field) to go along with five boards and four assists.

Cleveland center Tristan Thompson and shooting guard J.R. Smith, who were the only other Cavaliers to finish in double figures, both had 10 points on the night. Thompson also had a team-high 13 boards, while Smith contributed a flurry of clutch shots to go along with four rebounds and two blocks.

For the Warriors, who proved their worth yet again as the team with the best record in the 2014-15 regular season, made a furious comeback during the fourth quarter. Once they finally got their shots to fall, they stunned the Cleveland crowd when they cut the Cavs’ lead to just one point late in the fourth. However, the Cavs woke up and slammed the door shut on any chance of a Golden State comeback.

“All we have on our mind right now is Game 4,” said Cavs head coach David Blatt. “[LeBron] is playing the way we want [him] to play. I thought he played a terrific game. I didn’t see him take a lot of bad shots at all. I thought he was great, I thought he controlled the game and helped his team play the way they wanted to play and I’ll take it every day.”

Warriors point guard Stephen Curry, the 2015 NBA Regular Season MVP, struggled yet again on offense during the first half. However, he came to life during the second half en route to 27 points, six boards, six assists and three steals on the night

In their inspired come-from-behind effort, veteran shooting guard Andre Iguodala backed up Curry with a 15-point, five-rebound and five-assist performance off the bench. All-Star shooting guard Klay Thompson, who struggled this game, finished his night with 15 points and five rebounds, while power forward David Lee finally came off the bench to put up 11 points, four boards and two steals.

Up next, the Cavs will head into Game 4 of the 2015 NBA Finals on Thursday night at Quicken Loans Arena. The contest, which is slated to tip off shortly after 8:30 pm ET, will be broadcast nationally on ABC.