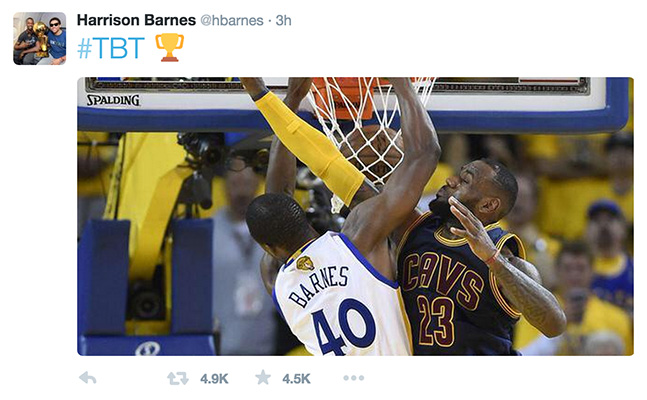 It looks like this rivalry isn’t coming to an end anytime soon.

The Golden State Warriors may have defeated the Cleveland Cavaliers in the 2015 NBA Finals, but that doesn’t mean the players from that series have moved on. While Harrison Barnes was a part of the winning end of that series, that didn’t stop the 6’8″ forward from taking a shot at LeBron James via Twitter on Thursday:

The picture that Barnes posted was an image of the 23-year-old dunking on the Cleveland Cavaliers star prefaced by an acronym for “Throwback Thursday.”

While Barnes is certainly a nice complementary player for the upstart Warriors, he is merely a role player. He averaged just 8.8 points on 37.3 percent from the field during the finals series.

On the other hand, James is widely considered to be the best player in the game. In what was arguably the greatest finals series performance by an individual player, the four-time MVP averaged 35.8 points, 13.3 rebounds and 8.8 assists per game.

With both teams favored to return to the NBA Finals in 2016, it would be no surprise if James and the Cavaliers were to use this as motivation entering the season.

Cleveland’s first matchup with Golden State this season is scheduled for Christmas Day at Oracle Arena in Oakland, California.