Report: Kyrie Irving (Kneecap) May Not Play Until Next January 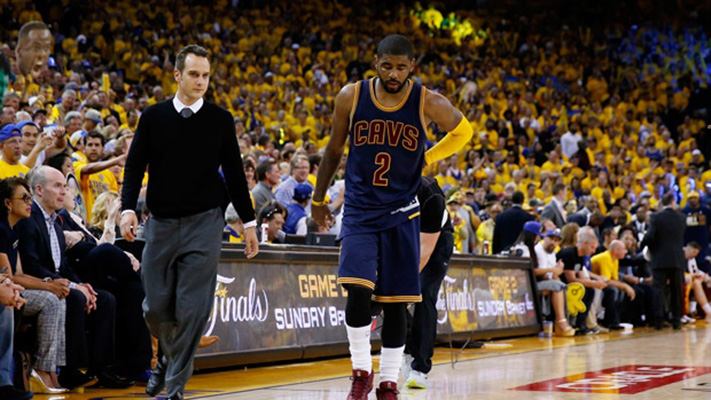 According to Chris Haynes of the Northeast Ohio Media Group, the Cleveland Cavaliers are planning to work Kyrie Irving back into playing condition carefully and methodically as the point guard recovers from a fractured kneecap suffered in Game 1 of the NBA Finals.

The news comes as a big surprise as multiple sources said that his rehabilitation process was going smoothly. However, it has now been revealed that Irving has a slim chance of playing on opening night against the Chicago Bulls and may not be available up until January.

The three-time All-Star underwent surgery in June and his recovery time was set at three-to-four months. Assuming he is sidelined on the far side of a four-month window, that has Irving returning near late October at best.

The thinking here is to bring Irving back slowly without risking a setback and to have the point guard at full strength entering the playoffs.

At basketball camp in July, Irving went on to say,

“I’m honestly not putting a date on anything. People are going to put a date regardless. I’m just continuing to be on the journey I’ve been on, and that’s continuing to get better every single day and rehabbing my leg.”

The presence of backup point guard Mo Williams now becomes that much more vital, as the former Cavalier looks to pick up the slack with Irving out.