LeBron James: “Our No.1 Objective Right Now Is to Sign Tristan” 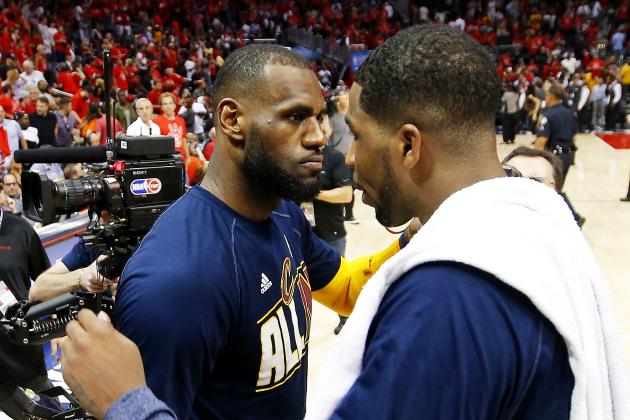 LeBron James still believes re-signing Tristan Thompson is of the utmost importance for the Cleveland Cavaliers.

While speaking at an event on Thursday for his foundation, James once again vouched for Thompson, who remains a free agent long after the start of free agency:

“Our No. 1 objective right now is to sign Tristan,” James said Thursday at Cedar Point amusement park. “He’s a huge part of our team. Short term and long term he makes our team more dangerous.”

Both James and Thompson share the same agent, Rich Paul. Earlier this week, Paul stressed that Thompson would not return to the Cavaliers after the 2015-16 season if the organization forces his client to accept a one-year qualifying offer of $6.8 million.

The 24-year-old power forward is looking for a five-year max contract worth around $94 million. The Cavaliers have offered less, and as a result, both sides haven’t talked about a deal since July.

The four-time MVP continues to clarify just how valuable Thompson is to the Cavaliers:

LeBron on Tristan Thompson: “He’s a huge piece for our team…we need to get him back.”

During last year’s postseason, Thompson excelled after being inserted into the starting lineup due to Kevin Love’s season-ending dislocated shoulder injury in the first round of the playoffs. At times, he appeared to be the team’s second-best player.

While there’s no doubt about the value of James’ input to the organization, his leverage can only go so far.

It’ll come down to money in regards to whether or not Thompson is re-signed to a long-term deal this offseason. If the five-year veteran is to return to Cleveland on a long-term deal, there will have to be a bit of compromise from both sides.