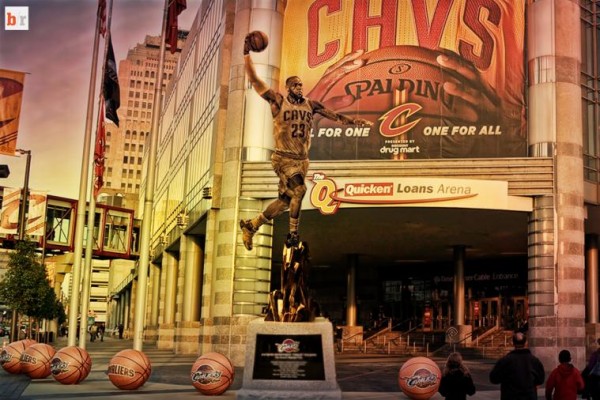 In the euphoria that’s come with the Cleveland Cavaliers reaching the NBA Finals for only the second time in the franchise’s history, the potential for immortality with respect to the contributions of LeBron James has led to one of the team’s legendary players saying that statues of James would be built all across the city.

The idea of James having a statue built in his honor outside of Quicken Loans Arena is a strong likelihood, regardless of whether one of his Cavs’ teams captures the top prize. However, Mr. Cavalier himself, Austin Carr, has taken that consideration and put it on steroids.

Carr was quoted in an article on Yahoo! Sports in which he said, “They would build a bronze statue in front of every building in the city. For him to bring it back here, especially the first year back, he would rise above anybody that has ever played in any sport in this town.”

That would vault him far ahead of such players like Lou Boudreau and Bob Feller, who were part of the last Cleveland Indians team to win a World Series in 1948. Feller has had a statue at Progressive Field since it first opened in 1994, but only a statue of Jim Thome and the pending unveiling of a statue of Larry Doby have been built since.

The last Cleveland team to win a major sports title was the NFL Browns in 1964, who were led by running back Jim Brown. Thus far, he has no statue, nor does quarterback Otto Graham, who led the team to the three NFL titles in the 1950’s after winning all four of the championships in the long-gone All-America Football Conference.

James has been the focal point of the team since his return last year, and his importance to it has been glistening since that time. The team’s miserable performance without him in the lineup has served as a prelude to his efforts in the postseason.

With Kevin Love out until next season and the health struggles of Kyrie Irving forcing him to raise his already lofty game to a new level, James has put the team in position to capture its first NBA title and give the city its first in 51 years.

Having grown up in nearby Akron, James is well aware of the hunger for a title among local fans.

“We all here know how long it has been since a champion has been in this city,” said James in that same article. “You can try and not focus on it. You can try to say, ‘OK, well, it’s not about that.’ But we all know it.”

James then spoke about what reaching the NBA Finals with this squad means to him, saying, “It’s very emotional to get back in this setting. I knew it wasn’t going to be easy. I knew it was going to take a lot of hard work and dedication. The toughest task for me was trying to get this team back to the Finals.”

Those NBA Finals will get underway on Thursday, June 4, on the home court of the Western Conference champion. Currently, the Golden State Warriors hold a 3-1 advantage over the Houston Rockets and are in prime position to be that opponent.