Don't Miss
Home / Media / LeBron James: ‘I Love Road Games In The Playoffs, I Get Up For Those Games’

LeBron James: ‘I Love Road Games In The Playoffs, I Get Up For Those Games’ 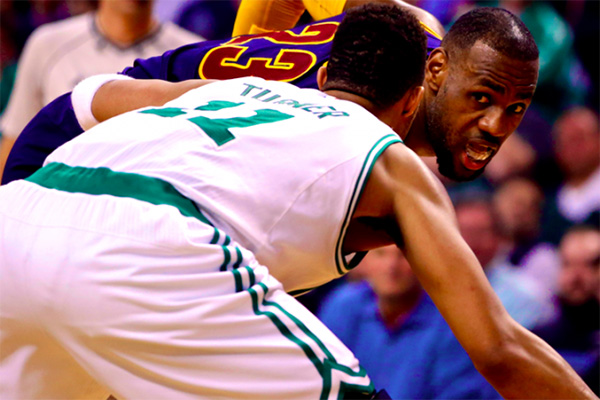 After another strong game in Boston on Thursday night, LeBron James has the Cleveland Cavaliers on the brink of their first playoff series victory in five years, and part of the credit for that effort should go to fans of the Boston Celtics.

James scored 31 points and grabbed 11 rebounds, collected four steals and dished out four assists. His seven points to start the fourth quarter helped maintain enough of a cushion to sustain the Cavs down the stretch in a 103-95 victory.

Along the way, Boston fans booed him every time he touched the ball, with some adding choice words to go along with their overall opinion.

During the postgame press conference, James was asked about the reception he had received from Boston fans, and said, “I love road games in the playoffs. I get up for those games even more than home games. I love that adversity that comes with it. I love going against the opposing fans, the opposing teams and everything that comes with it.”

James did give credit to the Celtic loyalists for sparking his motivation, saying, “For me being a competitor and me being someone they know personally, to be able to come out here and perform in front of those guys, it means a lot. They know the game, they know basketball, they know sports.” He later added, “They know sports, so for me to have some type of history in this city it means a lot for my legacy.”

Thursday night marked his eighth playoff game in Boston as a member of the Cavaliers, and in half of those contests, he’s scored 30 points or more. Thursday night’s effort was actually the lowest of those four performances, with his 45-point effort in an epic 2008 Game 7 duel against Paul Pierce serving as his best-ever Cleveland playoff performance in Beantown.

It was much the same during his four years with the Miami Heat as James averaged nearly 32 points per game in his five playoff contests in Boston, including another 45-point performance in 2012. That clutch effort came with the Heat trailing 3-2 in the seven-game series. By also grabbing 15 boards in the game, James sparked his team to victory in not only that series, but the NBA Finals as well as giving him his first championship ring.

James’ performance on Thursday night brought back memories of 30 years ago—only in reverse. In 1985, the Cavaliers had bounced back from a miserable 2-19 start to reach the playoffs. Unfortunately, their first opponent was the world champion Celtics, with a front line of Larry Bird, Kevin McHale and Robert Parish.

In that series, the heavy underdog Cavs dropped the first two games of a best-of-five series in Boston, then managed to win Game 3 at the Richfield Coliseum when Bird was unable to play. In the closing moments of the victory, Cleveland fans began chanting, “We want Bird.” Two nights later, they got him, as he scored 34 points, hauled down 14 rebounds and handed out seven assists in a 117-115 Boston victory that ended the Cavaliers’ season.

The moral of this story is that provoking a great player is a foolish thing for opposing fans to do, since it only motivates him to rise to the challenge. With Boston now in desperate straits for Sunday’s game by needing to win just to continue the series, Celtics fans will no doubt be amped up to give it to James one more time. In the end, that could be just enough to send the Cavs to the Eastern Conference semifinals.