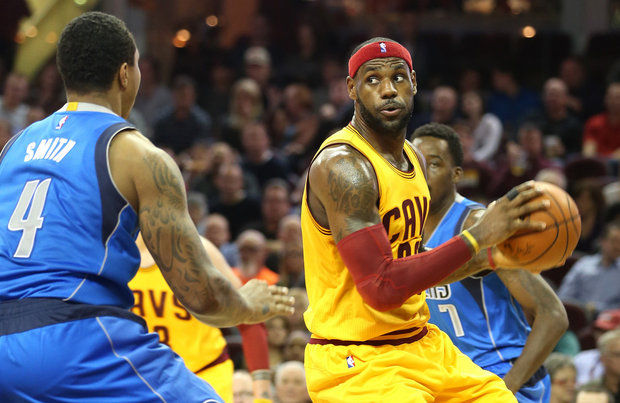 (Dallas, TX) – To kick off the first of a four-game road trip, the Cleveland Cavaliers (40-25) will travel deep in the heart of Texas to square off against the Dallas Mavericks (41-24) at American Airlines Center. The game is scheduled to tip off shortly after 8:30 pm ET on Tuesday night and will be broadcast nationally on NBATV.

The Cavs have now climbed their way up to the number two seed in the Eastern Conference playoff picture, while the Toronto Raptors, Chicago Bulls and many others in the East continue to struggle as of late. With the Mavs up next on their schedule, Cleveland has an opportunity to win a big game on the road.

LeBron James, who has struggled offensively the past two games, will need to have a much more efficient game in order for the Cavs to be victorious.

“They’re still a team that’s very, very good,” commented James. “They have one of the best coaches in our league and have one of the greatest players our league has seen in Dirk (Nowitzki). They have guys around them that compliment each other so well.”

However, James has had some very unpleasant memories against the Mavs (2011 NBA Finals), and the disappointment has indeed stuck with him for almost four years.

“It brings back memories for sure,” said James. “Memories that I try to forget, that I will probably never be able to forget. But it’s built me into who I am today. All those experiences and things I’ve went through have helped me today as a basketball player.”

On the verge of breaking yet another record, James is currently tied for the most assists all-time in Cavaliers history (4,206) with four-time All-Star point guard Mark Price.

The Mavs, who are a dangerous team in the heavily stacked Western Conference, currently possess three players from the 2011 championship squad that are still on the team. Led by 13-time NBA All-Star Dirk Nowitzki, center Tyson Chandler and point guard J.J. Barea re-joined the Mavs this season to reunite with head coach Rick Carlisle.

Outside of these three, the Mavs’ backcourt is completely different with a great one-two punch. Point guard Rajon Rondo, who was traded to Dallas from the Boston Celtics on December 14th, 2014, accompanies shooting guard Monta Ellis.

Coming off a 31-point performance in the Mavs’ 100-93 win over the Los Angeles Lakers on Sunday night, Ellis continues to have a highly productive season with 19.2 points and 4.3 assists per game. With an average of 1.94 steals per game, Ellis is currently ranked fifth in the NBA in said category.

With Rondo and Ellis being a legitimate threat to inflict damage on the Cavs’ defense, Kyrie Irving and J.R. Smith had best bring their A-game in order to outduel the two Maverick guards.

“We just take it game by game. It’s a long season and you’re going to have your ups and downs, but you’ve just got to climb out of there,” said Ellis after the win. “We’re going back home for a good bit of time for a lot of home games.”

With the recent addition of center Amar’e Stoudamire to bolster their bench and the return of small forward Chandler Parsons from a seven-game absence (left ankle injury), Tuesday night’s contest between Dallas and Cleveland is a must-watch for NBA fans.