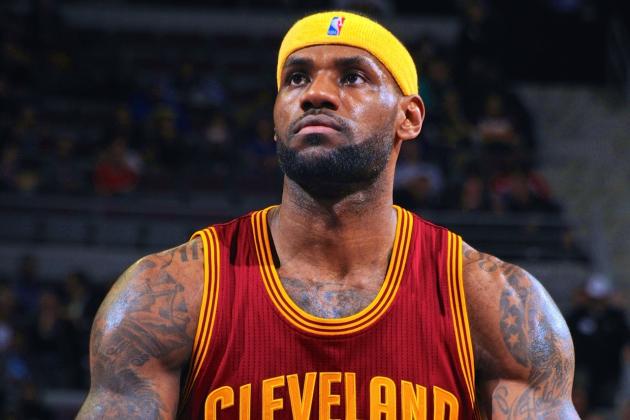 Over the course of LeBron James‘ illustrious eleven year career, his name has become seemingly synonymous with the term Most Valuable Player. In fact, during his first stint in a Wine and Gold uniform, James took home the MVP award in back-to-back years. However, his recent move back to the shores of Lake Erie has seemingly changed that and, according to head coach David Blatt, that just isn’t fair.

“That’s just kind of funny, to be honest with you. First of all, he’s the greatest player in our game, and he’s had, since he’s been healthy — and really all year, but particularly since he’s been healthy — his performance has been as high level as ever. And you don’t have to look very far at our record to see what impact he has on this team when he’s playing and not playing,” Blatt commented.

This season, James is averaging 26.4 points, 7.3 assists, 5.5 rebounds and 1.5 steals on a near 50% field goal percentage, even after playing through some sort of injury for much of the season.

While those particular numbers may not jump off the page when compared to LeBron’s unbelievable 2009-10 MVP season, the term most valuable has never been so fitting for the self-proclaimed King. During James’ recent absence from the Cleveland Cavaliers lineup while rehabbing from nagging back and knee injuries, his impact on his new team became all-too-evident. The Cavs were a lowly 1-8 during that stretch, ultimately falling to below .500.

Since he’s returned? They have won 10 straight.

“Certainly it does say something about what his value is when he is absent, what happens to the team. But again, it’s of course what his impact on his own team but it’s also the performance that that player is having relative to the rest of the league,” Blatt went on to explain.

So how does James compare to the other frontrunners, James Harden and Steph Curry? The trio are closer than one might think.

In regards to scoring, the three players are neck-and-neck. Harden leads the league with 27.6 points-per-game, but the total difference between he and LeBron is only 1.2 total points.

Assists? Again, quite close. Curry leads the three of them with 8.9, but LeBron only trails by 1.6 per contest (Harden trails both with 6.8).

What about rebounds? Harden and LeBron put up nearly identical numbers (5.6 ad 5.5 RPG respectively) and Curry trails by about half a board.

Keeping up with the trend, the difference between the three players’ shooting percentages is negligible, with LeBron leading the trio by a hair.

“Obviously if we look at our own example [in James], then you’re looking at an MVP player in every respect. Which is not new news to anyone,” Blatt responded when asked to compare James with his closest competition.

With the numbers so close between James and his fellow frontrunners, the term “value” comes especially into play. Detroit Pistons coach, Stan Van Gundy, seems to agree.

“The award says itself: It’s the guy you think is the most valuable to his team. I personally think it’s always going to come from a successful team. Doesn’t necessarily have to be the best team, but it’s going to come from a successful team, and a lot of times it’s going to be the best player on one of those teams. I mean, right now we can narrow it down to four or five guys. I could probably do the ballot for you guys and then you’d make the final determination.”

When it pertains to individual value, it’s hard to make a case for anyone but James. The difference between his team’s performance with him on the court and their production when he’s absent is monumental. That much is hard to argue.

While each team’s respective win-loss records is a relevant factor to add to the discussion, it cannot be the end-all-be-all deciding factor. Sure, the Warriors have the NBA’s best record at the moment, but what would they look like if you plucked Curry from the lineup? Would they do better than a .125 winning percentage? They definitely wouldn’t be any worse.

Regardless of whether or not he’s in the MVP conversation, James doesn’t let it get to him.

“I don’t really get involved in what people say about the way I approach the game,” James said Tuesday. “I know I can play the game at a high level. I know who I am and what I’m about. So, me making an excuse about my injuries throughout the time while we were struggling would just add on to what we were going through. So, it made no sense for me to talk about it until I crossed that path. I went out and played. Sometimes I was hurting the team, sometimes I was helping the team, but I went out and gave what I had. But it got to a point where I knew that I just had to give my body a rest. My body told me it needed a rest, and it’s paid off for our team.”

So will LeBron James take home his fifth Most Valuable Player award at the end of the season? Only time will tell. However, as David Blatt made clear yesterday, it wouldn’t be smart to discount the man who has won four already. After all, there are few more valuable players out there than one LeBron James. They don’t call him “King” for nothing.