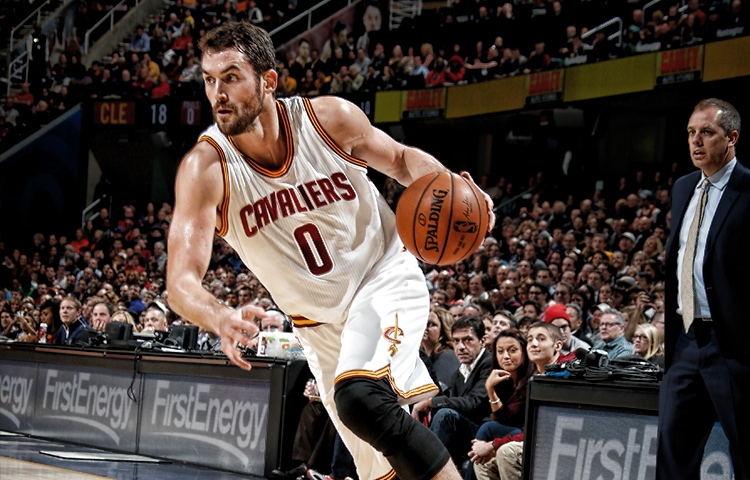 (Cleveland, OH) — Kevin Love paced a trio of Cavalier double-doubles with 28 points and 10 rebounds as the Cleveland Cavaliers won their third game in a row with a 107-94 win over the Indiana Pacers in Saturday night action at Quicken Loans Arena.

Joining Love in that select group were Kyrie Irving with 24 points and 10 rebounds, and Tristan Thompson with 13 points and 11 boards. LeBron James also contributed 19 points and seven assists.

Love provided much of the early offense, hitting for 16 of Cleveland’s first 26 points, including a pair of threes, while also adding four rebounds.

Cavs Head Coach David Blatt said about Love’s performance, “I think when he’s in the flow, you’re going to see games like that. (He) is playing the best defense of his career.”

Thompson started at center because the Cavs were without the services of veteran center Anderson Varejao, who suffered a rib contusion in Wednesday night’s rout of the Washington Wizards. For the Pacers, center Roy Hibbert sat out his third consecutive game with a sprained ankle.

Blatt praised Irving, saying that the fourth-year point guard “has been playing consistently great basketball this year,” and also acknowledged how Thompson adapted to starting instead of coming off the bench. Calling him the game’s “unsung hero,” Blatt said Thompson “set the tone for us. He played a lot of minutes, took the challenge, took the responsibility.”

Irving stated after the game, “I got a lot of long rebounds. They were taking a lot of perimeter shots.” He also joked about his three blocked shots, saying, “I’d trade those blocked shots for steals any day.”

After the game, Love also acknowledged the team’s total effort. “We made a considerable effort on both sides of the ball,” said Love, who added, “I thought we played a really good game against a team on a back-to-back.”

The Cavaliers wasted little time taking control of the contest, hitting 10 of their first 12 shots from the field to take a 24-6 lead. One week ago, Cleveland led the Toronto Raptors by that score, then ended up losing by 17, and soon after this strong start, the team’s fans started wondering if they were witnessing some déjà vu.

That’s because the Pacers hacked away at a 27-8 deficit by scoring 13 unanswered points. By the end of the opening stanza, the Cavs’ were only holding a 29-21 advantage.

Thompson said about the fast start, “We knew we had to come out and make them call time out first,” also noting, “We knew if we got stops, got them out of rhythm, we’d be in good shape.”

Virtually all that Cavalier scoring from the field came in the game’s first six minutes plus, with the team managing just three free throws and a James fadeaway jumper in the closing seconds the rest of the way. In between came nine straight missed shots and two turnovers.

In the second quarter, the Cavaliers once again looked like they would take control of the game when Thompson split a pair of free throws with 8:21 left before intermission to make it 37-25. However, a 14-4 Pacer run made the margin even closer at 41-39 less than four minutes later.

With Cleveland holding a 50-43 lead after two Love free throws with 2:33 to go before the break, Indiana tallied six straight points, and had a chance to take the lead after a James miss. However, Donald Sloan’s layup was blocked by Irving, with Love then throwing an outlet pass to James, who converted on a layup for the final points of the first half and helped the Cavs take a 52-49 lead.

Following intermission, the Cavaliers put together a pair of solid runs during the third quarter, starting off with a 15-5 surge that was capped by a Thompson turnaround jumper with 8:31 left to make it 67-54.

After Indiana twice got within nine over the next three minutes, Cleveland put together a 15-5 push over another three-minute span that made it 85-66. A three-point play by James finished off that torrid stretch, with the Cavs eventually holding an 87-71 lead entering the final quarter.

In the fourth, the Pacers notched the first basket to cut the deficit to 14, but that would be as close as they got. The Cavalier defense clamped down on things at this point, allowing just one field goal over a five-minute stretch, enroute to take a 99-79 lead.

By this point, much of the Cavs bench had been put in the game and Indiana only got it within 12 in the game’s final minute to account for the final score.

James noted that the game plan against a physical team like Indiana was, “You have to try and ramp it up and keep turnovers down, which we did,” and also the reasons the team continues to improve. “I think defensively, we’re taking pride in it, and on offense, how good it feels to share the ball,” said James, who also said the way the team is approaching such off-the-court things as film sessions and shootarounds is also playing a role.

Love emphasized the importance of having the Cavaliers’ offense in sync, specifically referencing reaching the century mark in scoring. “If we can score more than 100 points, we’re going to win,” said Love.

The team will once again be home on Tuesday night to face the Milwaukee Bucks in a 7 p.m. tipoff at Quicken Loans Arena.

When asked by a reporter about a potential letdown against the teams, Blatt said, “That is a team on the rise. That is not a team to be underestimated.”