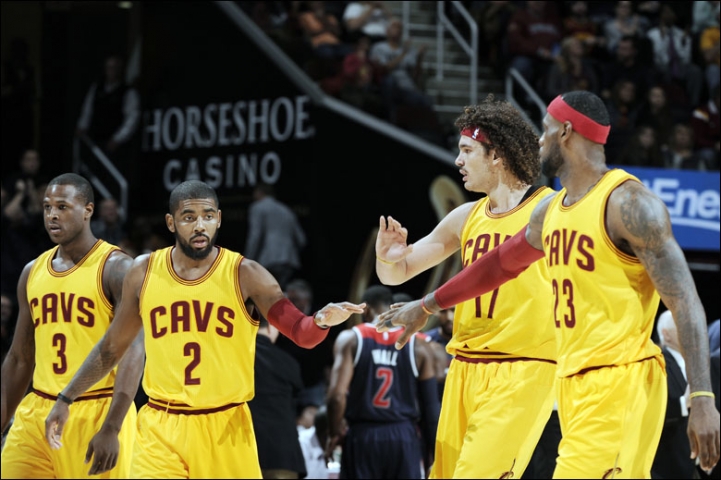 (Cleveland, OH) — An 18-2 first quarter run propelled the Cleveland Cavaliers into a comfortable lead they wouldn’t give up for the remainder of the game as they got revenge on the Washington Wizards with a 113-87 rout on Wednesday night at Quicken Loan Arena.

The victory evened the Cavaliers’ season record at 7-7, while Washington dropped to 9-5 on the year.

The trio of LeBron James, Kevin Love and Kyrie Irving combined for 68 points on the night, with James coming close to his first triple-double on the year. The veteran scored 29 points, collected 10 rebounds and dished out eight assists. Once again, his first quarter effort sparked the team with 12 points and five assists.

After the game, James compared the team’s effort in this game to last Friday’s 91-78 loss to the Wizards, saying, “They pretty much did what they wanted (last Friday). We didn’t show up, and tonight we did.”

Head Coach David Blatt acknowledged the role of the team’s defense in the win, noting how the team’s 10 turnovers only resulted in seven opposition points. “We’ve defended the last two games the best we’ve defended all season.”

Cleveland held a slim 12-10 lead just past the midway point of the first quarter as James hit a pair of free throws with 5:21 to go to start a string of 11 unanswered points.

With just under three minutes to play in the opening stanza, a James three-pointer made it 30-12 to close out the surge. Washington was able to get the margin down to 13 at 31-18 as the buzzer sounded to end the opening 12 minutes.

Just past the midway point of the second quarter, the Cavs led by 10 at 45-35, and then proceeded to take their biggest lead of the half at 58-39 on the strength of a 13-4 run. James and Love combined for nine of those points.

However, an old bugaboo arose again in the final 1:27 before the half when the Wizards tallied the final seven points, the last three coming on a Caron Butler three with less than a second to play for a 58-46 Cavalier advantage.

After intermission, Washington made a couple of attempts to get back in the game, but only briefly got the deficit into single digits. The closest they came was when they trailed 60-50 with 9:26 to go in the third and Paul Pierce went to the line for three shots. He was only able to make one of those attempts, with Cleveland notching eight of the next nine points to once again take control of the contest.

The Cavs defense then clamped down in the final five minutes of the quarter, allowing the Wizards only a pair of field goals. On the offensive side, James once again led the push, scoring nine of the final 11 points to give the Cavaliers an 81-67 advantage after three quarters.

Cleveland dominated play in the final 12 minutes, going up by as many as 29 after a Dion Waiters’ three-pointer with 2:54 left that made it 107-78.

The aforementioned Cavs defense was most evident in their clamping down of Washington guard John Wall, who scorched them five nights ago with 28 points. In this contest, Wall managed just six points and was only able to get off six field goal attempts.

Irving, whose job it was to cover Wall, said in postgame comments, “We definitely wanted to come out with a different focus. We felt we owed them one. It’s all about hitting first and having that hit-first mentality.”

When asked what the key to defeating the Wizards was, Irving said, “Make them play a half-court offense as much as possible.”

Blatt was asked about how the team was able to make such dramatic improvement with regard to Wall from one game to the next. “The team did a good job swarming. He’s (Wall) not a guy you guard with one guy only,” said Blatt.

As for the team itself, Blatt was equally praiseworthy, saying, “We are a better team when the ball is moving and the ball is moving.” He then added, “When we defend and get out on break, that fosters good play.”

Cleveland returns to action on Saturday night when they host the the Indiana Pacers in a 7:30 matchup.