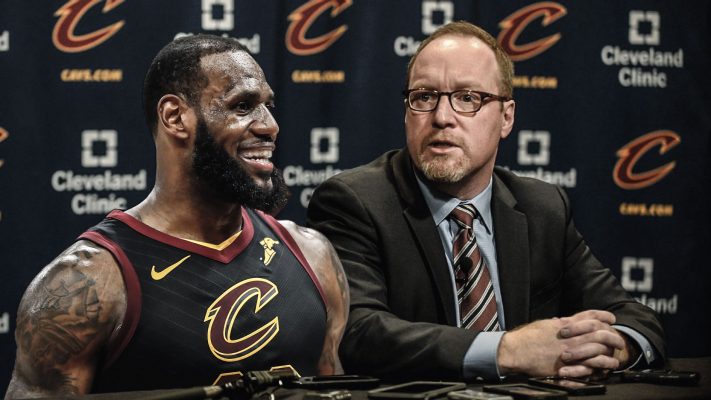 Former Cleveland Cavaliers general manager David Griffin has discovered that working with LeBron James during his time with the Cavs has better prepared him to deal with the fanfare surrounding New Orleans Pelicans rookie forward Zion Williamson.

Joe Vardon of The Athletic spoke with Griffin, who’s making sure that his mistakes with respect to dealing with James aren’t repeated when it comes to Williamson, the top overall pick in last June’s draft.

“The blessing of having been with LeBron is I learned a lot of what I did wrong,” Griffin said. “Like the time away, I learned a lot of the mistakes we made. And we made a lot of them. And LeBron was so good, he made us win anyway. So it would be a high-class problem that this kid (Williamson) turns out so good that we can make as many mistakes as we did for LeBron and still win.

“LeBron’s a special winning machine, to think anyone’s going to be that, no,” Griffin continued. “But what it did do is it prepared us very much for the crush of attention that comes from having a player that is that well followed.”

Williamson’s highly anticipated NBA debut was delayed by three months because of injury.

However, the intense interest in him has barely waned, with the comparison to James inevitable since the 17-year veteran also entered the NBA under a white-hot spotlight as the league’s top overall pick.

By the time Griffin became the Cavaliers’ general manager in 2014, James was set to begin his second tour of duty with the franchise.

During the three years that followed, Griffin and James were part of the Cavaliers organization that reached the NBA Finals every year and captured the 2016 league title.

Yet, despite that success, Griffin left the organization in 2017 and James followed one year later.

After being hired by the Pelicans last year as the executive vice president of basketball operations, Griffin soon had the good fortune to have his team win the NBA lottery, which allowed him to choose Williamson.

Shortly after that windfall, Griffin dealt superstar Anthony Davis to the Los Angeles Lakers for a collection of young players and future assets.

In the years ahead, Williamson is likely to be the focus of adoring fans and severe critics, which is what James has dealt with even before he entered the NBA. Griffin is smart enough to know that his three years with James were not all perfect and learning from one’s mistakes remains one of the basic tenets of growth.