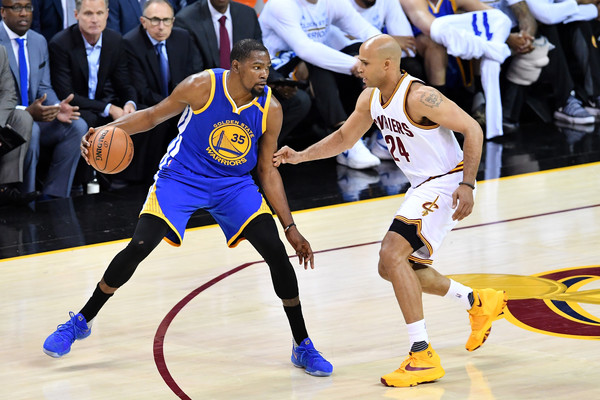 The landscape of the NBA changed when the Golden State Warriors added Kevin Durant. The superstar was joining a 73-9 team coming off a devastating loss to the Cleveland Cavaliers in the NBA Finals.

Richard Jefferson was on the Cavs team that took down the Warriors in 2016. During the broadcast of Cleveland’s game against the San Antonio Spurs on Sunday, Jefferson criticized the Warriors for adding Durant as opposed to “running it back” with the same rosters.

Richard Jefferson criticizes the Warriors for not running it back after the 2016 Finals: “They were like, ‘We’re gonna go get our big brother’” pic.twitter.com/NfqKRmTuOx

“That was the crazy thing because they literally [had] Harrison Barnes who was one of their guys, drafted, been there,” Jefferson said. “And you understand, you’ve gotta do that 10 times outta 10. But where I come from in the park and in the street, if you’re playing and you lose to somebody, the first words are, ‘Run it back, same teams.'”

His broadcast partner, Austin Carr, seemed to agree with Jefferson. Although any team would be crazy to pass on adding Durant, Jefferson clearly felt robbed of an opportunity for a true rematch in 2017.

“Run it back, same teams because you don’t wanna change anything,” Jefferson reiterated. “It’s like, ‘No, we felt like we’re the better team. We just didn’t play well enough so let’s run it back.’ They didn’t do that. They were like, ‘We need to go reload. We’re gonna go get our big brother.'”

Play-by-play man Fred McLeod also pointed out that the Warriors and Barnes would have probably reunited had they won the championship.

But of course, Durant chose Golden State and the rest is history. It’s unfortunate that the Cavs and Warriors were never able to “run it back” for a third straight year, but it’s impossible to fault the Warriors for adding Durant.