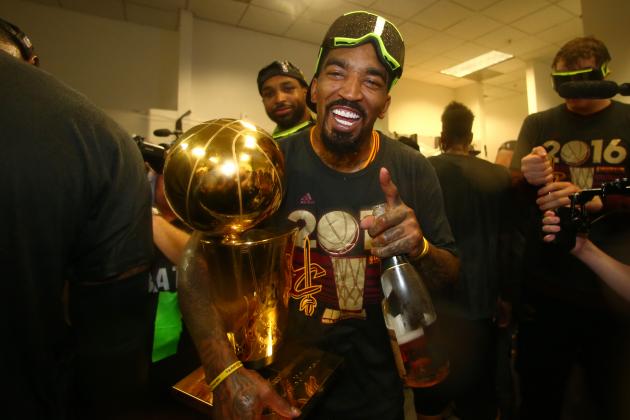 When the Cleveland Cavaliers won the NBA championship on June 19, 2016, it set off celebrations among all Cavs fans and especially the team’s players at the time.

In the case of J.R. Smith, the efforts of Oracle Arena security guards to prevent him from smoking a cigar proved to be an exercise in futility.

Tom Reed of The Athletic looked at the tradition of lighting up a cigar to celebrate a championship, popularized by Boston Celtics Hall of Fame coach Red Auerbach. He offered some insight into how the Cavaliers followed that legacy with their iconic victory:

“Oracle Arena security guards tried in vain to stop Cavaliers guard J.R. Smith from puffing away on his cigar. Cleveland players had no interest in obeying rules, however.”

The origin of how the cigars made it into the team’s locker room in the first place was also noted by Reed. Cavaliers’ senior director of strategic planning Brock Aller paid more than $2,500 on the day of the game to pay for 52 cigars.

The latter number was significant, since it marked the number of years since a Cleveland sports team had won a title. Aller looked back at his gamble:

“I took the risk knowing if we lost I’m probably going to have to eat this. Us winning was the only way I was going to get reimbursed. Had I turned in a receipt after a Game 7 loss, it would have been a bad look.”

One player who also embraced the concept was Cavs power forward Kevin Love, who referenced the connection to Auerbach:

“A victory cigar to me is something I’ve always dreamed of doing and wanted to do. It’s kind of like watching those old Boston Celtics tapes and seeing Auerbach toast it up, seeing [Michael] Jordan with the championship (and) with (his) hat halfway off having the Larry O’Brien Trophy (in his arms) while having the big stogie coming out. Stuff like that is cool.”

In addition, Cavs center Tristan Thompson explained the reasoning behind the defiance of Smith and his teammates:

“I thought it was pretty cool. To me, it says you’re at the top of the mountain. Nobody can tell you nothing. So light up a nice cigar.

“We were spraying champagne all over the place. My eyes were burning and I had goggles on. What a lot of people don’t know is we were also drinking tequila. When we got to Vegas later that night, I had my cigar. If everyone else is having a cigar, I’m having a cigar. I’m getting the full experience because it might be once in a lifetime.”

Unfortunately for the current edition of the Cavaliers, any such celebrations are years away, if they occur at all. Two integral aspects of that title run, LeBron James and Kyrie Irving, are no longer on the team as a painful rebuilding process began this season.

How long it takes before the Cavs make another dramatic run to the finals remains unknown, but the celebrations from that magical 2016 title will remain forever.