A Detailed Look Inside a LeBron James Pass Called the ‘Punch, Snap, Hammer’ 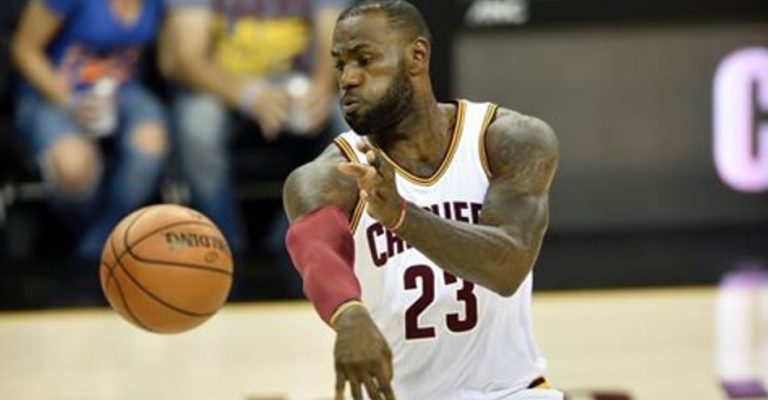 One of the many talents possessed by Cleveland Cavaliers forward LeBron James continues to be his ability to dish out crisp passes that lead to buckets for his teammates. That ability to deliver the ball has been enhanced through a unique process that’s acquired the name of the “Punch Snap Hammer.”

ESPN’s Dave McMenamin wrote about the origin of the play and broke down how it works, with precision and defensive distraction being the key components to achieving success. It had originated during Cleveland head coach Tyronn Lue’s time as an assistant with the Boston Celtics under Doc Rivers, who’s since moved on to coach the Los Angeles Clippers.

“I know Doc has ‘Punch Snap,’ and Blake [Griffin], he can make that pass to J.J. [Redick] too,” Lue said. “If I have it, Doc’s probably somewhere involved in it.”

James saw a variation of it used when he played for the Miami Heat, during the dramatic late moments of Game 6 of the 2013 NBA Finals against the San Antonio Spurs, which ended with Ray Allen’s historic 3-pointer being the end result.

“There are probably like five or six different hammers in the NBA. We ran one in Miami as well in Game 6 when I missed a 3. That was a hammer action too, but it wasn’t the same option,” James said. “I set the step-up for Rio [Mario Chalmers], and then he took [the screen] down, and then they came up and got me, and [Chris] Bosh got the rebound. So, that’s a hammer.”

Lue indicated that because of the timing issues involved, the opportunity to put it into play last year didn’t present itself.

“We had it last year, we just never ran it. We didn’t really have a lot of time to work on the timing of it,” Lue said. “I thought we had a chance this year, having a training camp and just continuing to work on it six to seven times and just getting the pass down, getting the timing down, and then we were just able to execute it in the game.”

The addition of veteran Mike Dunleavy to the Cavs roster and his ability to quickly pick up the nuances of the play made it a more likely option during the season. Dunleavy indicated that during the preseason, the team had only practiced it a few times.

Despite such a limited run-through, the Cavaliers put it into practice during their third game, a 105-99 win over against the Orlando Magic on Oct. 29. The plan, just past the midway point of the second quarter, began with Kevin Love tossing the ball into play to J.R. Smith. James and Tristan Thompson then switched their spots along the baseline while Dunleavy moved to the opposite wing.

A Smith pass to James then sets things in motion, with James beginning a drive to the baseline. That resulted in Thompson setting the hammer screen, which allowed Dunleavy to go to the corner to get a feed from James before putting up a catch-and-shoot effort. What’s unique about this play is that James threw roughly a 45-foot bounce pass to Dunleavy before he even began cutting to the corner. So, initially, James’ pass was going to no one.

“If you come out of the timeout, we work on stuff at practice where it’s timing, timing to a T. Execution,” James said. “Because if you expect for your guy to be there, then he has to be there. And I trusted that once I received the ball, our timing is perfect, and I just let it go.”

Dunleavy spoke about how getting there too early can actually work against a team.

“A lot of times when teams run that play, the guy getting the shot usually will go early and be there waiting for it,” Dunleavy said. “It’s better to be a little bit late, and the ball will be getting there at the last second. But the angle that he threw it at, he just had blind trust. He hoped I’d be there.”

James also had the option of throwing the ball into Thompson, but the play worked as expected, with Dunleavy connecting on a 3-pointer.

Thompson was actually key to making the play run smoothly, since an inability to free up Dunleavy would’ve meant that James’ pass would’ve resulted turnover.

Despite the success of the play, Dunleavy sees some room for improvement in the future.

“To be honest with you, we didn’t even get that open,” Dunleavy said. “As I recall, we watched the film with Tristan, and he could have probably gotten a better piece of [Elfrid] Payton, and the shot was a little tough, too. But it looked good. It worked.”

Still, Lue was happy with the results, noting how NBA TV rated it as the “Assist of the Night”:

“They went crazy over that play. It was a nice play. Perfect timing. Tristan was perfect with the screen,” Lue said. “With the timing of Mike getting to the corner, and LeBron turning and going baseline and making the whip-around pass. So, it was beautiful.”

James was even more animated about the success achieved.

“I saw it on social media after the game. It was like, ‘S—!’ I’m more in awe of passes I make and blocks I make more than me scoring the ball,” James said. “It was like, ‘S—.’ And it was on time, on target. And it almost grazed the baseline, too. So, it was pretty cool.”