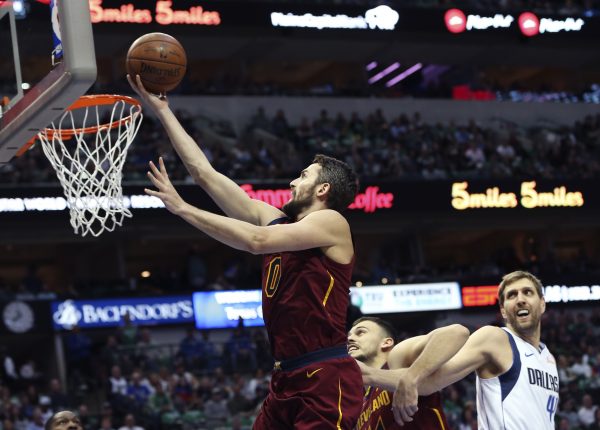 Kevin Love returned from his toe injury back in early February, but now the All-Star big man is dealing with a new injury that might keep him out of Monday night’s game versus the Detroit Pistons.

After taking a hard fall in a loss to the Dallas Mavericks over the weekend, the Cleveland Cavaliers star is questionable for Monday night’s game.

.@kevinlove questionable for tonight’s game vs Pistons with low back contusion. Hard fall Saturday at Dallas

Following the All-Star break, Love expressed his goal to not miss any further games due to injury this season. If he does end up missing Monday’s matchup, it will mark his third missed game since the mid-February break.

Still, Love has returned to All-Star form when he has played. So far in the month of March, Love is averaging 17.8 points and 12.0 rebounds per game. He’s recorded four double-double performances in six appearances.

The truth is, with just 12 games left on the schedule, the Cavs benefit more from losing than they do from winning at the moment. The worse their record is, the better chances the Cavs have of selecting at the top of the 2019 NBA Draft.

While it will be a shame if Love has to miss time due to his injured back, there’s no reason to push the veteran star as the 2018-19 campaign winds down.