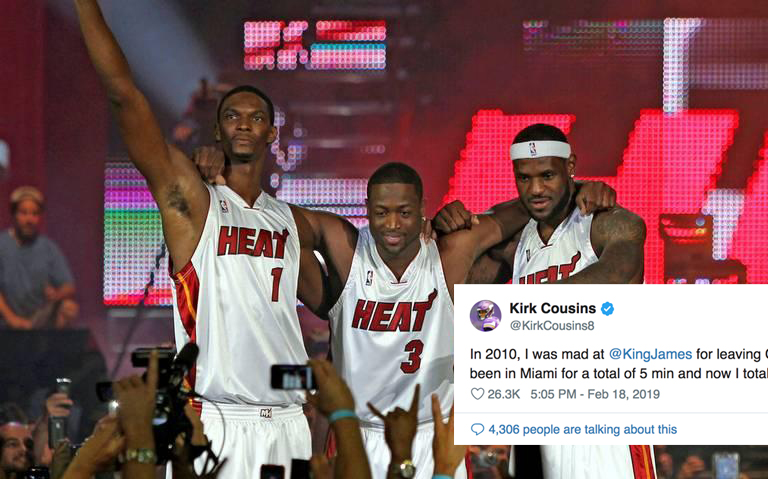 LeBron James’ decision to leave the Cleveland Cavaliers for the Miami Heat left a lot of NBA fans hurt and angry.

In the nearly nine years since, most have come to understand James’ 2010 offseason move, and that seems to include NFL star quarterback Kirk Cousins.

In 2010, I was mad at @KingJames for leaving Cleveland…but I’ve been in Miami for a total of 5 min and now I totally understand.

The Minnesota Vikings quarterback has been spending a little quality time in Miami this week. From his social media posts, it sounds like the 30-year-old gunslinger is enjoying himself and learning to appreciate the city that attracted James away from Cleveland.

Unfortunately for Cousins, his tweet led to a bit of backlash.

After his thoughts went public, the Vikings faithful proceeded to slam Cousins for his words. He led the Vikings to a disappointing 8-7-1 record in his first season with the team, and fans are clearly still angry about it.

Whether he was simply sympathizing with James’ decision from almost a decade ago or was taking a shot at the brutal winter weather in Minnesota, his words didn’t sit well with the team’s supporters.

For Cousins’ sake, let’s hope Vikings fans forget about his tweets more quickly than Cavs fans forgot about the “Decision.”