Don't Miss
Home / Rumors / Report: 5 Cavs Players That Are ‘Most Likely’ to Be Traded

Report: 5 Cavs Players That Are ‘Most Likely’ to Be Traded 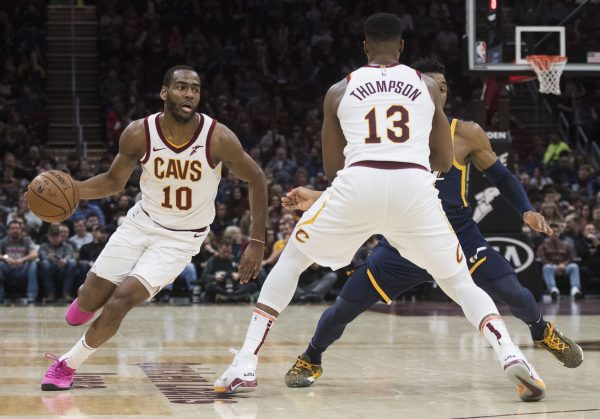 Having dropped 15 of their last 16 games and sporting a record of 9-38 on the season, the Cleveland Cavaliers are continuing to look at possible trades before next month’s deadline, and thanks to a new report, fans now know which Cavs players are most likely to be moved.

For the first two players mentioned, the fact that Burks and Hood will be free agents at the end of this season makes them options for contending teams looking for both depth this year and the opportunity to shed salary prior to July’s free agency period.

Burks, who’s 27 years old and was acquired from Utah in the Kyle Korver trade, is the most likely candidate to be dealt:

“There is no reason for the Cavs not to trade him. Really, he was acquired from the Jazz for Korver in December in large part because of his contract — it’s such a tradable commodity. They should move him for the best offer they get now because he’s a free agent at season’s end. He’s a capable player, yes, but at age 27 he hasn’t shown enough to warrant a new contract from Cleveland in this rebuild. A nice player, but not a cornerstone.”

In the case of the 26-year-old Hood, the fact that he signed a qualifying offer last summer allows him to reject any potential trade. Vardon pointed out a key reason why Hood might potentially squash any attempt to trade him:

“Whoever trades for Hood gets his ‘Bird’ rights, which means they would be able to go over the salary cap to pay Hood. He might not want that.”

The 30-year-old Love remains off the court due to toe surgery that was performed on Nov. 2, but would offer a team a player who can potentially deliver a double-double every game once he’s healthy.

However, the four-year extension that he signed with the Cavaliers last summer is set to pay him $120 million over a four-year period beginning next season. Vardon explained how that type of financial commitment might be a drawback for a team considering their options, especially given his injury history:

“Any team that trades for him is going to owe him $120 million over the next four seasons. It’s an eye-popping price tag for a player who’s missed more than 90 games over the past three seasons. His last game this season was Oct. 24. It’s almost unfathomable that a team would trade the kind of assets it would take to acquire him without being sure his injured toe can make it through the season.”

Thompson is 27 years old and has been the Cavs’ most consistent player this season. While he did miss 10 games due to injury, he’s compiled career-highs this year in both scoring and rebounding and has also embraced the mantle of leadership on the rebuilding Cavaliers.

He currently has a contract that’s paying him $17.5 million this season and will pay him $18.5 million next year.

Vardon cited a quote from Thompson which makes it clear that he is aware that anything could happen, including a trade:

“Blake Griffin got traded. At the end of the day, if the trade is right and the pieces are guys they feel can help the franchise moving forward, I’m totally understanding. It’s a business. If you don’t have a no-trade clause, anything can happen.”

As for Clarkson, the guard was acquired at last year’s trade deadline and has been effective off the bench this season for the Cavs. Vardon explained how the 26-year-old would offer a team someone who can inject instant offense into a lineup:

“He’s third among bench scorers in the NBA (16.9 points per game, a career high), has provided instant offense for years, and is only 26. Who doesn’t need that kind of player off the bench? He’s shooting .453 percent from the field, nearly a career high. When Cleveland traded for him and Larry Nance Jr. last year, it included a first-round pick in its package to the Lakers. Clarkson’s been better this season.”

Vardon noted how the original plans from the preseason of competing for a playoff berth have given way to the realities of dealing with multiple injuries and struggles across the board. He indicated that Cavs general manager Koby Altman is likely following a specific strategy when it comes to any more deals:

“To do this rebuild right, with an eye toward being a team capable of making a deep playoff run years from now, Altman’s looking for future assets — draft picks, ‘bad’ multiyear contracts of expensive players who could be traded down the road, and young players with potential.”

Exactly how much Altman could get for the five players above or anyone else currently on the roster is unknown, but the Cavs are in a position of having to blow up their roster.

How long it takes before the team gets back to simple respectability, much less finals contention is even more of a mystery.