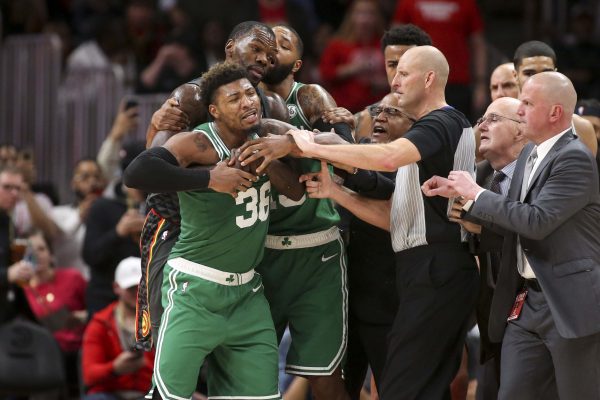 Even though veteran guard J.R. Smith no longer plays for the Cleveland Cavaliers, he continues to keep up with the goings-on within the NBA.

On Saturday night, he offered his derisive opinion of Boston Celtics guard Marcus Smart after Smart was ejected from the Celtics’ matchup against the Atlanta Hawks, calling him a “bum” on social media.

JR Smith chimed in on Marcus Smart's reaction to his ejection against the Hawks.

Smart was ejected in the third quarter after being restrained from going after DeAndre’ Bembry. However, Boston eventually completed a comeback without the services of Smart, outscoring Atlanta 30-16 in the fourth period to win 113-105.

Both Smith and Smart have developed notorious reputations for their actions on the court, with the two players having their own recent history. During Game 2 of last year’s Eastern Conference finals, Smith shoved the Celtics’ Al Horford, who was in the air attempting to complete an alley-oop pass from Smart.

Smith was given a flagrant 1 foul on the play, and the bad blood between the two players lingered.

It surfaced again during the preseason last October when Smith shoved the Celtics’ Aron Baynes and Smart charged Smith in defense of his teammate. Smart was ejected from the contest, with both players subsequently taking to social media to challenge each other to a fight.

Smith is presently waiting for the Cavaliers to trade him to another team or simply release him after the organization indicated in November that he would no longer be playing for them. That decision came in the wake of Smith claiming that the Cavaliers were tanking the 2018-19 season in order to obtain a high lottery draft pick.

One key reason that the Cavaliers haven’t released Smith is due to his contract, which is paying him $14.7 million this year. He’s also scheduled to receive $15.7 million next year, but only $3.87 million of that amount is guaranteed.