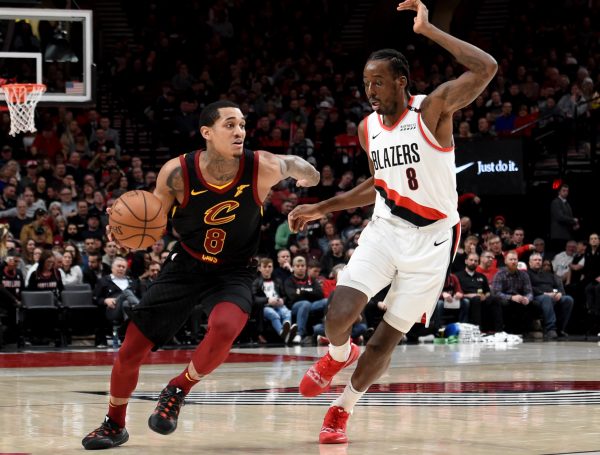 The Cleveland Cavaliers’ rebuilding project has them considering more potential deals prior to the NBA trade deadline next month, but one report indicates that two key Cavs players are thinking about signing extensions rather than being traded elsewhere.

Joe Vardon of The Athletic spoke with center Tristan Thompson and guard Jordan Clarkson about their uncertain statuses, with both players citing a desire to maintain the status quo:

“In interviews with The Athletic, both expressed interest in long-term extensions from the Cavs. They also know that if (when?) those offers don’t come, their expiring contracts and court skills will make them slam dunks to be moved by the following February.”

While both players are aware that their time with the Cavaliers could be limited, they’re confident in their abilities to lead the team back from its current misery. Thompson doesn’t feel the need to make a case to stay:

“I understand both sides. I think they want flexibility, but at the same time they’re trying to build and win, and you want winners around the program. I’m a winner. I am not here to sell myself, I don’t think I need to sell myself. I think everyone knows what I bring to the table. I think they know that.”

Clarkson is staying focused regardless of which uniform he might be wearing in the future. However, he’s well aware of the realities of his situation:

“If I’m here, I’m all the way in. If I’m not part of their future plans, then it is what it is. I just know it’s a business at the end of the day.”

Vardon offered important reasons why the two players might be on the move at some point, regardless of their preferences to stay:

“The flexibility the Cavs are more interested in, though, is in future seasons beyond 2020-2021, when they hope they can realistically contend again in the East. Thompson’s salary for next season is $18.5 million and Clarkson’s is $13.4 million. Then, both contracts expire. So you can see how attractive a trade piece either player would be for a contending team, especially one that would not want to take on future money. The Cavs will be in position next season to take back bad contracts in trades over the next few seasons, so long as they’re attached to draft picks.”

Thompson was the fourth overall selection in the 2011 NBA draft, selected by the Cavs three picks after they chose Kyrie Irving. The 27-year-old center signed his current deal in 2015 following an extended holdout. Despite missing a stretch of games due to injury this season, he’s put up career-highs on both the scoring and rebounding fronts, while also providing leadership to a young roster.

Clarkson was acquired last February from the Los Angeles Lakers along with Larry Nance Jr., but struggled during his first season in Cleveland. This year, he’s shown great improvement and is ranked third amongst NBA bench scorers, averaging 17.0 points per game.

The 9-37 Cavaliers will conclude their six-game Western Conference road trip with a game in Denver on Saturday night. The team has dropped 14 of its last 15 contests.