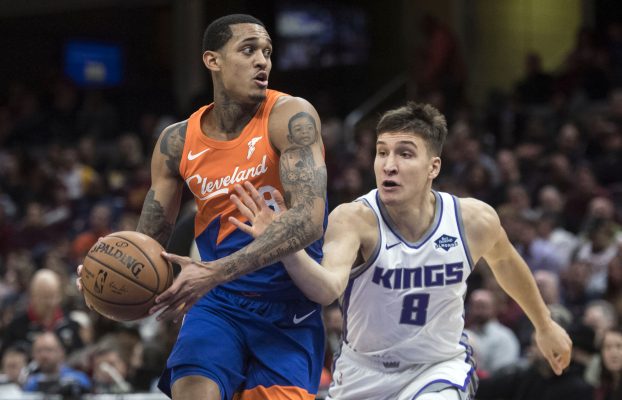 It’s no secret that Jordan Clarkson struggled in Cleveland last season after coming over from Los Angeles.

Despite averaging a solid 14.3 points on 44 percent shooting during his time with the Lakers, he didn’t translate that success to his early days with the Cavaliers.

During the grueling 2018 playoffs, Clarkson’s poor shooting severely hurt Cleveland. His inability to establish himself on either side of the ball contributed to a near first-round exit to the Indiana Pacers.

Things continued to get worse in the second round, despite the team’s complete rout of Toronto. Against Boston, it was more of the same and his inability to generate any positive offense actually resulted in his first DNP-CD of the playoffs. It was a dreaded mark on his season stat sheet that happened two more times against the Warriors.

No one exactly knew what Clarkson was thinking after his abysmal playoff run, but it’s doubtful that he was 100 percent confident about coming back to Cleveland this season. Based on media coverage, that lack of confidence may have been mutual.

A December to Remember

Despite last season’s poor performance in the Wine and Gold, Clarkson was an immediate part of the rotation as the LeBron James-less 2018-19 season tipped off.

From the get-go, it was clear that he had put the past behind him. Throughout October and November, the shooting guard had ups and downs, but ultimately reminded the Cleveland faithful that he is an offensive spark plug that can really help the team’s second unit.

But it was Clarkson’s December that really showed how he not only put last season behind him, but also grew as a player over the summer. During the final month of 2018, the 25-year-old averaged 18.7 points on 45.1 percent from the field.

While he still struggled from behind the arc, his 34.4 percent on 6.2 attempts kept opposing defenses honest and allowed Cleveland to space the floor, opening up better scoring opportunities.

Despite his struggles from the perimeter, his scoring started becoming more consistent in the month of December. Clarkson posted 20-plus points in seven outings during the last month of 2018, including a season-high 28 points in a win over the New York Knicks. He also had a 26-point game against Sacramento and a 24-point game against Memphis.

If you take a close look at his 2019 games like the outing against Indiana, it’s clear that Clarkson has fully regained the confidence he had in Los Angeles. Even down double digits against a strong Pacers team, the 25-year-old found ways to get the Cavs back in the game.

He’s often shown an ability to will Cleveland back into games that seem too far out of reach. Whether it be through attracting defensive attention on the perimeter, attacking the basket, or getting to the free-throw line, Clarkson has proven all season long that he can be an asset and playmaker on the court. A lot of people had forgotten that.

He’s become the second unit player that the Cavs were hoping he’d be a season ago. While there are valid reasons to try to deal him before the trade deadline (cap space, potential free-agency pickups), Clarkson’s recent play has made that a tougher decision for the Cleveland front office. By having a short-term memory and leaving the past in the past, the shooting guard has turned himself into the type of two-way player that Cleveland could really use.