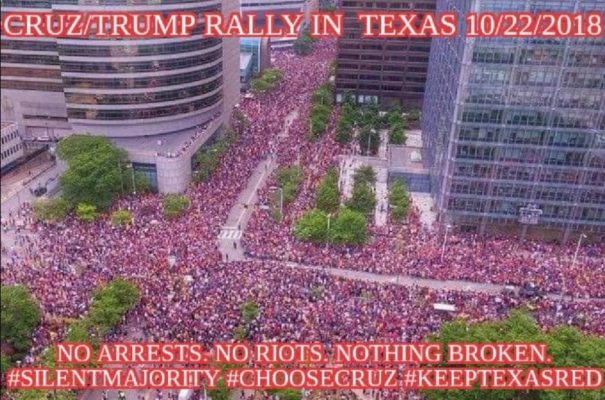 Prior to the start of President Donald Trump and Republican Sen. Ted Cruz’s rally at Toyota Center in Houston on Monday night, many supporters began to circulate an image on Twitter that reportedly showed a huge crowd — wearing mostly red clothing — congregated amongst a number of tall edifices.

The supporters insisted that the picture depicted the crowd that attended the rally. Well, turns out that that is simply not true.

The picture is actually from the Cleveland Cavaliers‘ championship parade that was held in June 2016. Several people dispelled the claim put forth by supporters of the president and senator, and proved that the picture was indeed taken in downtown Cleveland two years ago.

BUSTED! Trumpers brag about the crowds overflowin' into the streets at the Trump/Cruz rally in Houston, except this "rally" was in Cleveland two years ago. pic.twitter.com/HvF5msZC5j

#Trump #Trumpsupporters This is a photo Cruz toadies are sharing. That's one hell of a crowd!

However, "those guys" are not Trump and Cruz.

This is actually downtown Cleveland after the Cavaliers won the NBA championship two years ago.

The Cavs won their first NBA championship in June 2016, defeating the Golden State Warriors. The victory was shorty followed by a championship parade in downtown Cleveland that featured over one million people, which was the largest crowd to ever unite behind a basketball team and the sixth-largest sports celebration in history.

Cruz is running against Congressman Beto O’Rourke in what promises to be a very tightly contested election. Nevertheless, it’s quite amazing how the same crowd and same buildings go to every city, isn’t it?