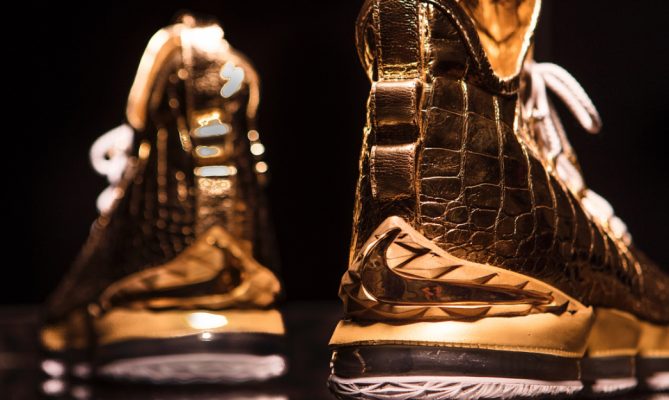 The legendary career of former Cleveland Cavaliers forward LeBron James has been marked by countless milestones, with one of the most recent being him reaching 30,000 points in career scoring last season. In belated recognition of that feat, James has been presented a $100,000 diamond and gold version of the Nike LeBron 15s from a prominent figure in the sneaker world, Dominic Chambrone, who’s better known as the “Shoe Surgeon.”

Torrey Hart of Yahoo! Sports offered a detailed description of the shoe:

“The shoes are made of ‘genuine’ crocodile skin, coated with 24 karat gold. They’re decked out with solid gold details including Riri zippers with custom zipper pulls made from 14 grams of 18 karat gold, and 2.32 carats of diamond-adorned lace aglets, both 5.8 carats each. There are also custom heel clips, lace loops, and diamond-adorned shoelace aglets (the covers over the end of the shoelaces).

“Chambrone also included a custom diamond-cut, gold necklace with a lion head pendant hanging from a Franco gold chain. In all, the project features over 238 diamonds.”

Chambrone took to social media to provide everyone an actual look:

One-of-one Diamond and Gold LeBron 15. Thank you @Nike for collaborating with me on the most challenging yet rewarding shoe I've created to date, in celebration of @kingjames 30k point milestone.

Chambrone is considered a legend when it comes to creating customized sneakers for Nike. He previously had created the unique shoe seen below, which was part of James’ photo shoot in the October 2017 edition of GQ:

In an effort to give fans a closer look at the process involved, a video was produced:

The reality is that the shoes are more of a piece of art than anything that James will wear. For fans looking to buy the standard version of the LeBron 15, they’ll likely pay in the neighborhood of $140.

James reached that 30,000-point milestone during the Jan. 22 road game against the San Antonio Spurs. During his 11 seasons as a member of the Cavaliers, he scored 23,119 of those points, ending the 2017-18 season with 31,038 over his 15 seasons in the NBA. Unfortunately for Cavs fans, he may likely never again score another point for the team after signing a contract with the Los Angeles Lakers last month.