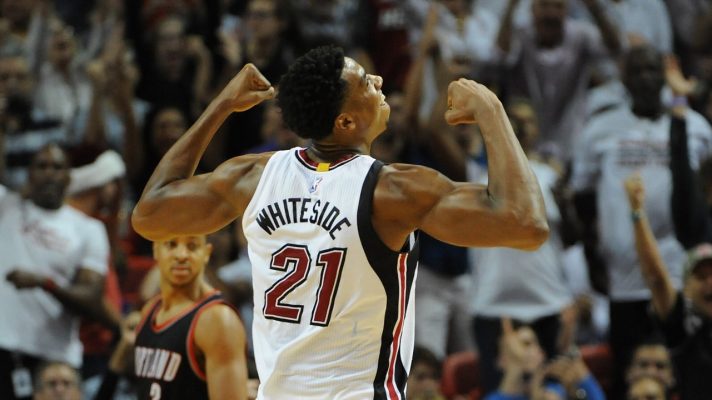 The Cleveland Cavaliers are continuing to reshape their roster for the 2018-19 season in the wake of LeBron James leaving the team for the second time in free agency. Reportedly, every player on the roster, with the exception of top pick Collin Sexton, is a candidate to be moved.

One rumored trade, according to Michael Shofner of All U Can Heat, would involve the Cavaliers sending center Tristan Thompson and guard Kyle Korver to the Miami Heat in exchange for center Hassan Whiteside. While Thompson hasn’t been mentioned in any possible trades recently, the 37-year-old Korver is a prime candidate to be dealt. Some speculation indicates that the Cavaliers have been seeking a first-round pick for the veteran sharpshooter.

“But never shy about making deals, the Cavaliers are rumored to still be interested in Whiteside,” wrote Shofner.

“The rumored potential deal would send Whiteside to Cleveland in exchange for Tristan Thompson and Kyle Korver.

“This deal would seemingly benefit both sides, as Miami could finally rid themselves of Whiteside and, in turn, receive a big man who is cheaper ($15.3 million as opposed to $22.1 million) and is a valuable asset with playoff experience.”

For the Cavs, Thompson represents a player who’s a rebounding machine. However, his limited production on offense often makes him a one-dimensional player that they’re paying a great deal of money. He’ll make just under $17.5 million for this season and slightly more than $18.5 million next year.

In the case of Korver, the luxury of having his talents on a team that’s undergoing a rebuilding project don’t mesh with their philosophy of trying to get younger. The 37-year-old veteran will be beginning his 16th season in the league and is scheduled to make slightly more than $15 million over the next two years. All of these factors make him expendable.

Whiteside and the Heat have been at odds for much of the last year, with the 7-footer complaining about limited playing time and the team citing his lack of consistency on the court. Since the Heat’s 2017-18 season ended in the a first-round playoff loss, Whiteside has been seen as a player the Heat desperately want to trade.

One of the chief reasons for Miami’s push relates to the amount of money that he’s set to make over the next two seasons. For the upcoming campaign, he’s set to make $24.4 million, and is due nearly $27.1 million in 2019-20.

When he’s motivated, Whiteside can be a force who can deliver a double-double virtually every night and also provide a shot-blocking presence. The problem is that such a mindset isn’t always evident, which has been the source of the Heat’s frustration.