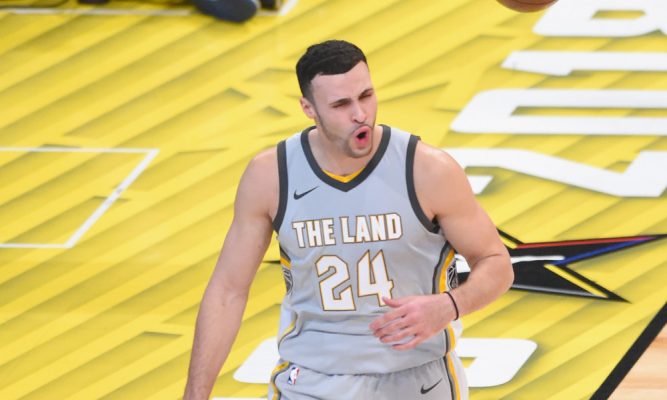 Moments after it was announced that the Cleveland Cavaliers had signed Kevin Love to a four-year, $120 million extension, it was reported that the player next on the list to receive an extension is fellow big man Larry Nance Jr.

The report added that Nance was in fact present at Love’s contract extension signing, pointing to a sense that there is mutual interest on both sides.

Larry Nance Jr., fresh off his wedding in Hawaii, attended Kevin Love's signing today. Nance is next up on the Cavs extension priority list.

Nance is currently signed through the 2019-20 season, but is set to make just $2.2 million this season and $3.3 million next season. The report of an extension seems to indicate that the Cavs are looking to keep him around long-term.

This is just the latest report this offseason that has made it clear that the Cavs are keen on keeping Nance in Cleveland, and there are quite a few reasons why.

In the 24 regular season games he participated in with the Cavs during the 2017-18 season, Nance averaged 8.9 points and 7.0 rebounds in just 20.8 minutes per game. It stands to reason that with added usage in the upcoming season, his numbers will certainly improve. Beyond that, the Nance name is already beloved throughout Northeast Ohio thanks to the 6-foot-9 forward’s father, who played for the Cavaliers from the late ’80s to the mid ’90s.

As the report has indicated, a deal is not done yet. Still, it seems likely that fans will want to keep an eye on this in the coming days as the Cavs look to retain the pieces that they want to help foster in the next era of Cavaliers basketball.