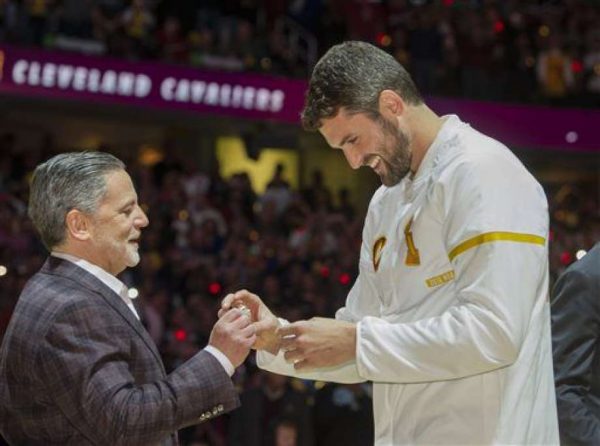 It appears the question of whether or not Kevin Love will remain on the Cleveland Cavaliers has been answered once and for all.

On Tuesday morning, it was announced that Love and the Cavs had agreed to a contract extension that will keep the All-Star big man in the Wine and Gold for many years to come.

While the offseason has been filled with rumors and reports that the Cavs were shopping Love, it seems they either had very different plans or a complete change of heart. With the extension, it looks like Cavs coach Tyronn Lue and general manager Koby Altman are keen on letting Love lead their team for the foreseeable future in the post-LeBron James era.

Shortly after the deal was announced, Cavs owner Dan Gilbert took to Twitter to congratulate his star player on the contract extension.

The @cavs franchise is proud to extend 5-time all-star and NBA champion @kevinlove four additional years. KLove has been nothing but class since he arrived in CLE in 2014. We look forward to his leadership and the exciting years ahead. We grind every day. Just like CLEVELAND. https://t.co/s4plLlBZ5n

When James and Kyrie Irving were still on the Cavaliers, Love was often scapegoated when the team faltered for any reason. He was commonly the topic of trade rumors, and there were times when his days in Cleveland seemed quite numbered. It now appears that he will be one of the focal points for the Cavs in the upcoming season, playing second or third fiddle to no one on the roster.

Here’s hoping to him living up to that challenge.