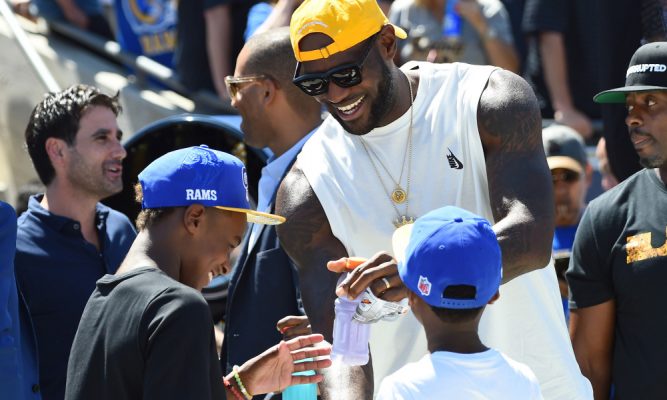 According to Payton, that fact is a big sign that James has decided to continue his NBA career with the Los Angeles Lakers.

Payton revealed the news in an interview with Black Sports Online’s Sheena Marie.

“His son just committed to Sierra Canyon, which is in the valley of L.A. That’s where his son is going to go to school,” Payton said of James Jr. “His son, at that age, you don’t want to be away from him for that period of time.”

Payton went on to explain that he believes that if James Jr. is going to be in school in Los Angeles, the rest of his family including his father would most likely follow.

“I think he wants to be around his son a lot, see his son a lot, so that’s going to be a key factor too,” Payton said of the four-time MVP. “He’s been saying this for the last year or so, his family is going to dictate where he goes.”

If James Jr. were to join the Sierra Canyon team next year, he would be playing alongside a fellow member of NBA royalty, Scottie Pippen’s son, Scotty Pippen Jr.

Pippen Jr. spoke to USA Today regarding the rumors of James Jr. committing to Sierra Canyon. While he said he had no knowledge of James Jr.’s future, he did say that he’d be welcomed with open arms.

“I used to hang out with him when we were younger,” Pippen Jr. said. “I feel like we would all gel together if he came. It would make sense for him to come here because it would take all of the pressure off of him playing-wise. We all feel the same pressure. I don’t know if he’s coming, but of course, we would love to have him.”

“One person with knowledge of Sierra Canyon said there is no truth to Payton’s comments,” Bryan Kalbrosky of LeBronWire wrote. “The person requested anonymity because he is not authorized to speak about the matter.”

Another individual, who also requested to remain anonymous, said that while they would love to have James Jr. at Sierra Canyon, they had not heard anything regarding a commitment to the school.

“I don’t always hear everything,” the source wrote in an email. “We would love to have him, though. As you may know, we are recognized as one of the best athletic schools in the country. That added to our tremendous academic record and the degree of diversity, we are the logical choice!”

It seems there is still quite a few facts that need to be cleared up before Cavs fans officially push the panic button. Still, it is quite clear that the James sweepstakes has officially begun.