Report: Gregg Popovich Ready To Go All In To Try To Sign LeBron James 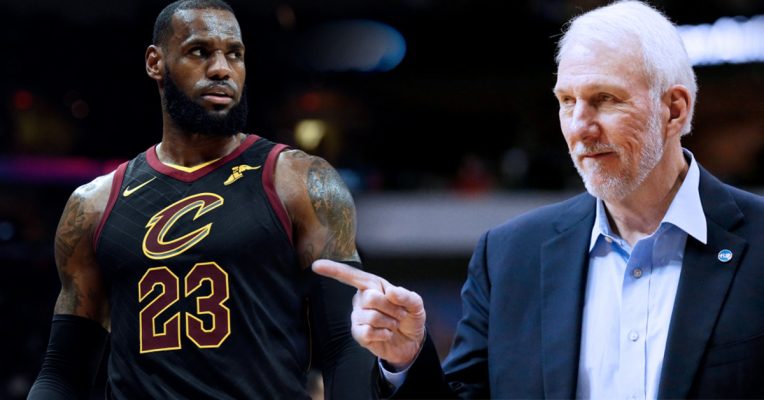 Among the list of teams that might be bidding for the services of Cleveland Cavaliers forward LeBron James when the free-agency period begins, the San Antonio Spurs are largely seen as a dark horse. However, one report indicates that the team’s head coach, Gregg Popovich, is preparing to make a strong effort to sign the 15-year veteran regardless of the current odds.

Marc Stein of the New York Times listed some of the strongest contenders such as the Los Angeles Lakers and Philadelphia 76ers before then noting:

“I’ve also been advised that the ever-persuasive San Antonio Spurs Coach Gregg Popovich is bound to try to force his way into the conversation to sell James on the merits of South Texas.”

James has spoken in the past about the level of respect he has for Popovich, who has led the Spurs to five NBA titles and holds James in the same regard. Just after the Cavs fell to the Golden State Warriors in Wednesday night’s Game 3 of the NBA Finals, James compared his adversaries to the Spurs teams he faced when playing for the Miami Heat.

Still, the reality is that the Spurs will likely remain a long shot to sign James, who’s given no indication in the past about actually wanting to play for the team. If he were to sign with San Antonio, he’d then be in the position of having to get through the stronger Western Conference to simply reach the Finals. That’s because the conference includes teams like Golden State and the Houston Rockets in his way. Of course, until he signs, every team remains in the conversation.