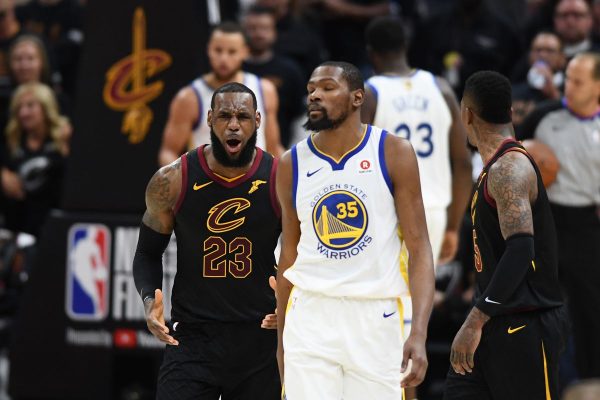 After winning his second consecutive NBA Finals MVP following the Golden State Warriors‘ Game 4 win over the Cleveland Cavaliers, Warriors forward Kevin Durant spoke on a number of different topics. In the midst of those remarks, he took a subtle shot at the perception of Cavaliers forward LeBron James being the league’s best player.

James has long been considered the game’s top player, especially when he and All-Stars Kevin Love and Kyrie Irving were part of the Cavaliers’ 2016 NBA championship. After that series, James was awarded the finals MVP award, thereby solidifying that designation. He was also considered the best during his two titles in Miami, when he had Dwyane Wade and Chris Bosh as teammates.

Some have even gone so far as to rank James in the same category as Michael Jordan as the greatest NBA player ever. Durant has been suggested by some as the player most likely to inherit James’ mantle as best in the game, yet he hasn’t been mentioned yet in any Greatest of All Time (GOAT) discussion.

During Durant’s time as a member of the Oklahoma City Thunder, he was the centerpiece of that franchise, leading the league in points scored for five consecutive years from 2010 to 2014. Yet unlike James, he was unable to deliver his team a title, with the 2012 team that lost to James’ Heat squad. That was despite having both Russell Westbrook and James Harden join him in the Thunder lineup.

James has won the NBA Finals MVP award on three occasions, which means that he still leads Durant by one in this category. Despite taking that jab at James, Durant still holds the 15-year veteran and other NBA legends in high regard, saying that their past efforts have served as motivation:

“Kobe [Bryant], M.J. (Jordan), LeBron, Kareem [Abdul-Jabbar], those dudes drive me, they push me every day to get to that level, to that standard and I want to be able to sit back and talk to them about basketball one day,” Durant said. “I’m happy I’ll be able dial up some of them and get some equity in that deal when it comes to being able to talk amongst the greats and experience what they experienced.”

While Durant isn’t planning to leave the Warriors any time soon, James could depart from the Cavaliers for a second time when free agency begins next month. Regardless of what team James ends up playing for next year and the collective talent they possess, he’s still likely to be considered the best player in the game.