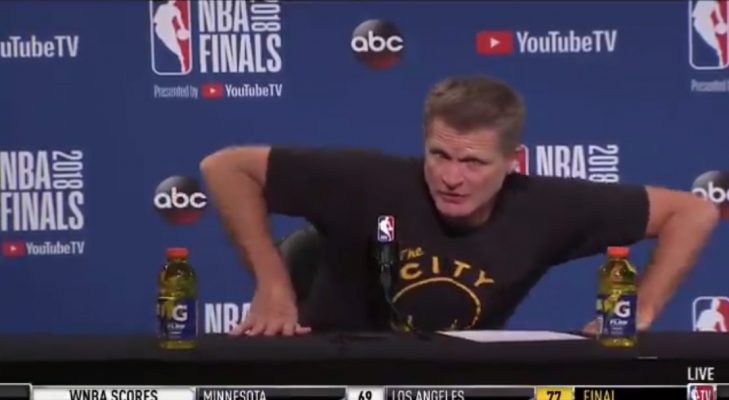 The Golden State Warriors are in a happy place right now and coach Steve Kerr was feeling it in his postgame press conference. The Warriors are having all the fun so far after they spanked the Cleveland Cavaliers 122-103 in Game 2 of the 2018 NBA Finals on Sunday.

At the podium for his turn at the microphone to answer questions from the assembled media, Kerr described the time he had with them by playfully ending his interview.

“By the way, I thought you guys were much better today,” Kerr said, which elicited laughter across the room. “Good job.”

The line was a hilarious jab at LeBron James as he was on his way out of Oracle Arena on Thursday after he was grilled to death about his thoughts on teammate J.R. Smith and his poor decision at the end of regulation in Game 1.

LeBron James reacts to questions regarding JR Smith's play at the end of regulation. #NBAFinals#GameTime pic.twitter.com/mREngTdbxv

James was incensed at the end of his interview session with the media when ESPN’s Mark Schwartz insisted that James tell everyone what he believed was on Smith’s mind when he ran out the clock. Rather than subject his teammate to greater scrutiny, James abruptly ended the interview by walking out on the media.

“Be better tomorrow,” he later said on his way out.

Smith rebounded George Hill’s missed free throw with the game tied at 104, with 4.7 seconds to go in the fourth quarter of the Finals opener. Instead of passing the ball to James or calling a timeout, Smith wasted clock thinking that the Cavs were up by one. That mistake was a costly one as Cleveland lost momentum in overtime, ultimately losing to the Warriors 124-114.

It remains to be seen what James will make of Kerr’s playfulness with the media. With the Cavs down 0-2 in the series, it’s easy for anyone on the team to be easily infuriated at the slightest provocation.