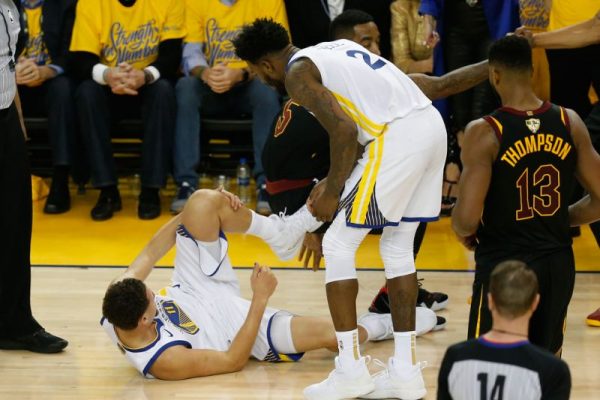 Despite coming back in Game 1 of the NBA Finals to finish out the rest of the game, Golden State Warriors guard Klay Thompson is now being listed as “questionable” for Game 2 against the Cleveland Cavaliers.

Thompson was injured in the first quarter of Game 1 due to Cavs guard J.R. Smith accidentally sliding into his legs.

He went to the locker room briefly, before returning and finishing out the rest of the game.

Although Thompson knows the play by Smith wasn’t intentional, he was apparently “pissed off” that his ankle took damage nonetheless.

Warriors guard Klay Thompson (ankle) says he is optimistic he will play in Game 2, "I'm going to do what I possibly can to play." He added that the under cut accidental slip from Cavs guard JR Smith on the play in which he hurt his ankle wasn't intentional but it "pissed me off."

Regardless of Thompson’s official tag for Game 2, he will likely do everything he can to suit up and give his team a chance to go up 2-0 in the NBA Finals.