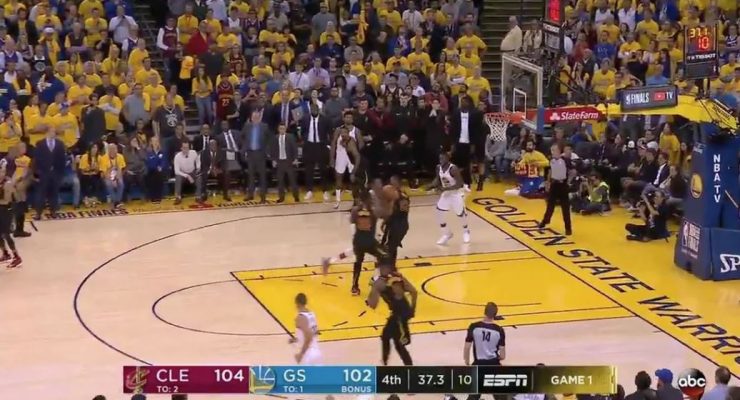 Game 1 of the 2018 NBA Finals saw the Golden State Warriors survive an epic 51-point performance from LeBron James as they beat the Cleveland Cavaliers 124-114 in overtime. But the Warriors may have gotten more than a little help from the referees to escape with the win.

Late in the fourth quarter with less than a minute to go and the Cavs up 104-102, the Warriors’ Kevin Durant drove down the middle of the lane when James came over to help and drew a charge. Referee Ken Mauer blew his whistle and initially called an offensive foul on Durant.

But NBA rules dictate that officials can review a play in the last two minutes of regulation or overtime to assess if a defender is in the restricted area or not to overturn the call if necessary.

Mauer explained the decision to review that particular play between Durant and James in this way:

"The reason for the trigger is that we had doubt as to whether or not James was in the restricted area. When over at the table, we then are allowed to determine whether or not he was in a legal guarding position."

However, Mauer’s explanation only covered part of the questions revolving around the mystery as to why James, who was clearly outside the restricted area, was called for the blocking foul nonetheless.

To explain the situation further, NBA Senior Vice President of Replay & Referee Operations Joe Borgia went on the air via NBA TV to discuss the turn of events.

Joe Borgia, NBA Senior Vice President of Replay & Referee Operations, joined @NBATV to discuss why the call on the Kevin Durant drive to the basket was overturned from a charge to a blocking foul on LeBron James. pic.twitter.com/zFQzVJqseM

“One of the reviewable matters once they’re at replay is whether James was in a legal guarding position or if an offensive player, if Durant maybe did something illegal, maybe with an extended foot,” Borgia told NBA TV’s Matt Winer. “What the decision was with Mike Callahan here in the replay center along with Kenny Mauer on the court who called the offensive foul, that James was not in a legal position. He was still sliding to his left when Durant started his upward motion, therefore the call was overturned to a blocking foul.”

Despite the decision that was made eventually, Borgia told Winer that it was still a bang-bang play which means the call could have went either way. During the broadcast, Steve Javie, the NBA’s rules analyst and retired referee, called the play an offensive foul from his perspective. Even if James was sliding, he believed that James’ left foot was planted well enough to warrant the benefit of the doubt despite his right foot still moving into position.

But Durant went to the line after the call reversal and promptly made both free throws, tying the game at 104 and setting up the wild final few seconds of regulation. It was a tough loss for the Cavs who had control of the game’s tempo up until that last minute.

Game 2 should be very interesting as the Cavs can either bounce back or wilt under the pressure of trying to win on the road after a tough loss in Game 1.