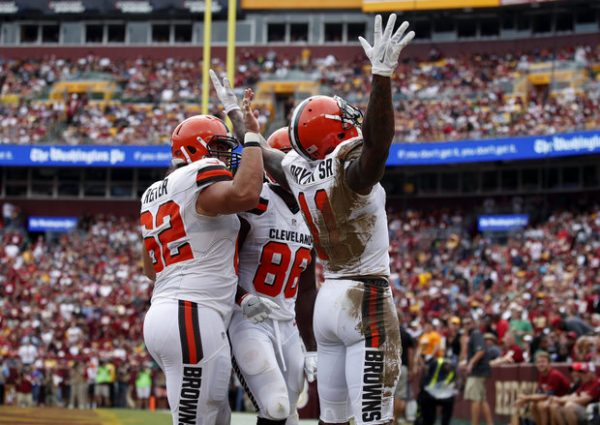 The influence of LeBron James within the sport of basketball is evident from his stature in the game, but the impact of the Cleveland Cavaliers forward in other sports seems to be just as evident. That’s because wide receiver Terrelle Pryor of the Cleveland Browns has reportedly been fined by the National Football League for imitating James’ signature move, the chalk toss, after scoring his first NFL touchdown reception.

Mary Kay Cabot, the Browns’ beat writer for Cleveland.com wrote that Pryor had gotten reports that he had been fined by the league. However, he has yet to receive official notification, with the fine expected to total $9,115.

“I heard different things,” Pryor said. “I heard I did, but I didn’t get the letter, so I’m not sure.”

The NFL has been cracking down on celebratory gestures, with one of the more recent fines ironically being handed out to cornerback Josh Norman of the Washington Redskins, the player who covered Pryor last Sunday. Norman’s imitation of shooting a bow and arrow after grabbing an intercepted pass wound up costing him $10,000.

The specific reason for the Pryor fine was because it’s against league rules to use the ball as a prop in any celebration. Pryor was unaware of the rule and seemed dumbfounded by the league’s response, saying that he would appeal if the news is true.

“I had no clue. I didn’t know you couldn’t. I mean, it’s my first touchdown as a wideout,” Pryor said.

At the time Pryor performed his imaginary chalk toss, he was given a 15-yard penalty by the game’s officials. He expressed some regret that the penalty forced the team to try a 48-yard extra point, which they made.

“Absolutely, I don’t want to hurt my team,” Pryor said. “I don’t know, man. I got a battle going on with a great corner (Josh Norman), we were down 14-0 and we came back. I was juiced up. That’s point blank, period. There’s nothing else I can say about that. I apologize to my teammates, especially the special teams coach because I put them in a bad bind. But the juices were flowing, man.”

James would undoubtedly understand, having also played wide receiver during his high school days. With J.R. Smith’s continuing uncertain status, there’s even been some joking that Smith could join Pryor on the Browns, though Cavs fans would prefer seeing him perform at Quicken Loans Arena come late October.