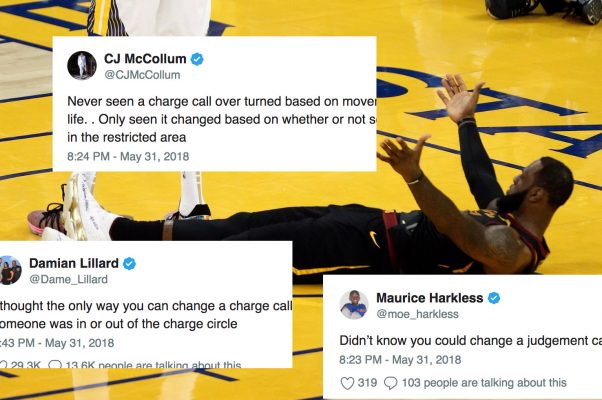 Game 1 of the NBA Finals was filled with controversial moments from start to finish. However, none were more controversial than when the game’s referees overturned a charging foul call on Kevin Durant and turned it into a blocking foul on LeBron James late in the game.

With just 36.4 seconds left on the clock following the play, it was a hugely impactful call to make on basketball’s biggest stage. While the Oracle Arena crowd was jubilant over the overturned call, many could not understand how the game’s refs would make such a huge change on what amounted to a judgement call.

Some of those who were left scratching their heads were James and Durant’s own colleagues. A number of NBA stars took to Twitter to share their opinions on the questions call.

Never seen a charge call over turned based on movement in my life. . Only seen it changed based on whether or not someone was in the restricted area

Why can you review block/ charge and not any other call? That don’t make sense to me ??‍♂️

Didn’t know you could change a judgement call….

If the call had been confirmed as an offensive charge, the Cavs would have regained possession with a real chance to ice the game. Instead, Durant was sent to the line and managed to tie the game up.

The rest, as they say, is history.